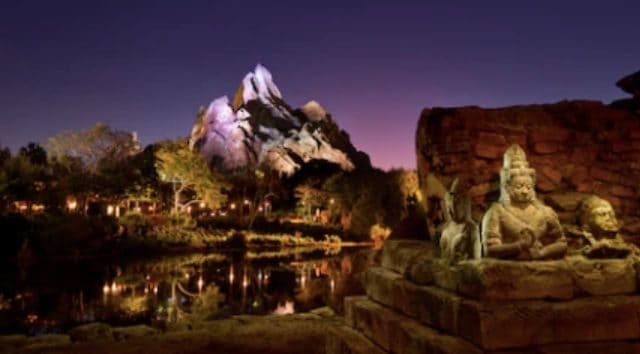 Here I will analyze Animal Kingdom’s attractions to provide guests with an idea of what to expect during the experiences. This guide will give you a list of “warning labels” to help you determine whether Animal Kingdom attractions may be too intense for members of your travel party as you make your plans.

Keep in mind that everyone’s definition of “scary” is different. Some people love roller coasters and others can barely look at one without feeling anxious. Some children are ready for thrill rides as soon as they reach the height limit, and others need a little time before they can handle the intensity.

I have tried to include everything that I can possibly think of that may set off fear or anxiety for as large a variety of park guests as possible.

SPOILER ALERT! If you do not want to read the information that gives away details about attractions, read no further. If you are like me and have members of your travel party who may have sensitivities to consider as you make your plans, you have come to the right place!

Flight of Passage is an extremely popular attraction, and I can see why as it is one of my favorites. It is a 4D simulator where guests take a ride on a Banshee.

My little boy met the 44″ height requirement for it by the time he turned 4. He wanted to try it and loved every second of it. When we ride together, he periodically checks on me to make sure I am not scared.

However, not every child who meets the requirement will enjoy this ride, and many adults worry that it will be too intense for them as well.

This attraction also tends to make some people a little emotional. Overall, it is a fun ride, but it can feel very real to children and to anyone who is fearful of movements they aren’t in control of.

This attraction is a dark boat ride similar to Small World. It moves slowly through serene scenes from Pandora. The imagineers say that this ride is meant to be peaceful.

It is dimly lit, and there are lots of creatures that may be hard to identify. There is also a large animatronic Pandora resident at the end, but it is not very intimidating.

I cannot think of anything else that might be scary, but if I have left anything out, please comment. Your thoughts may help a fellow Disney traveler. I have not witnessed any children becoming upset on this ride. My little girl loved it when she was a baby.

The safari is another of my favorite attractions because I love seeing the animals, and it is different every time I ride. It is a 20-minute ride in an open-air vehicle that takes you through Animal Kingdom’s Harambe Wildlife Reserve.

You will see a variety of up to 34 animals that might include lions, crocodiles, rhinos, okapi, hippos, elephants, warthogs, wild dogs, giraffes, and zebras. It is unlikely you will spot all 34 because the animals move about and some may be hidden away.

It is not meant to be scary, but if you have a fear of any particular animal living in the reserve, there is a chance you might see it, so plan accordingly. Rest assured that while there are no visible barriers, Disney has cleverly crafted ones in place for safety.

The ride is about 18 minutes long, so if you are traveling with little ones, you may want to stop by a restroom first. There are a few times where the safari vehicle goes over some bumps, but it is not intense. Overall, it is a fun one for the whole family.

This train runs to Rafiki’s Planet Watch. Its hours of operation differ from the park hours, and it is typically closed by 4:30 PM.

You can get a behind the scenes look at some of the animals on the ride. It is not scary, but it can be loud. Rafiki’s Planet Watch is an island where you will find Affection Section, which is a petting zoo, as well as the animal conservation center, and a trail to explore.

You will need to re-board the train to return to the other parts of Animal Kingdom.

Kali River Rapids takes you on a river journey through rough rapids. Ride vehicles are round, and passengers are seated facing one another. It s similar to theme park river rapid rides, but it is Disney-fied with lovely scenery.

If you want to ride and don’t want to spend the rest of the day drying off, you might consider bringing a change of clothing and making this your final ride before heading back to your hotel.

Lockers for items you want to stay dry are available on a first-come, first-served basis. They are located across from the entrance to Kali River Rapids

Expedition Everest-Legend of the Forbidden Mountain

Expedition Everest is Animal Kingdom’s roller coaster. To me, it is Walt Disney World’s 2nd most intense coaster (but we will see how I feel about that once TRON Lightcycle Power Run and Guardians of the Galaxy open).

It is also a lot of fun. My little boy once convinced my husband to take him on it 5 times in a row. He convinced me to do the same, but I only made it to three times before I had to call it a day.

I get super nervous about roller coasters, myself. On paper, this seems like one I would really dislike. I am typically not into large drops or intimidating heights where you can tell how high up you are. However, I love this ride. That said if you have members of your travel party who take one look at it and say, “no way,” they should sit this one out.

This is a tricky one. There are people who don’t like coasters but are fine on this. But, for a lot of people, it is very scary. In fact, this is one ride that Disney actually labels as “scary.”

I waited until my little boy was 5 to tell him about this one because I wasn’t sure which camp he’d fall into. As I mentioned, he loves Flight of Passage and Expedition Everest. But the same kid who wanted to do Everest five times in a row got off this ride and said, “That was scary. Let’s not do it again.”

Although the height limit for this ride is only 40″, consider what you know about your child before you introduce him/her to it. If you are on the fence, consider not starting your day with this one as it could cause your child to decide not to try anything else.

This attraction is a spinner. It is like Dumbo but with cute little green triceratops ride vehicles. It is the only tame ride in DinoLand U.S.A. While it is not meant to be scary, it is a little high up. Those with a fear of heights may not want to ride.

Primeval Whirl only operates seasonally at this time. It is a mini coaster with spinning ride vehicles. It is similar to a “Crazy Mouse” type ride, which you may have ridden at a fair,. Similarly, it feels like a carnival ride to me.

If you have never been on Crazy Mouse and want something else to compare Primeval Whirl to, imagine Barn Stormer. Now, imagine someone has replaced the ride vehicles with the teacups. That’s the sort of thing you are in for here.

This ride has a relatively high height restriction at 48″ so super young riders will have to skip it. It has no scary theming, but it might be too rough and wild for some people in your party.

I personally get an “I am going to come flying out of this thing” feeling when I ride Primeval Whirl. As with everything else, everyone experiences it differently, and I know people who love it and people who don’t even want to look at it.

It’s Tough to be a Bug

It’s Tough to be a Bug is based on a “Bug’s Life.” It is a 4D show about bugs and their interactions with the environment. A lot of people like this show; it is fun!

On the surface, it seems like it would be great for small children. However, out of all the shows at Disney, this is the one where I most consistently and frequently hear small children burst into shrieks and see a parent scoot to the exit with them. Some kids do not really understand 3D or do not have the eye development to really see it just yet.

But for some, the idea of something coming at them seems very real and scary. Additionally, many people are inherently afraid of insects and arachnids. Then again, some kids like it. My 5 year old loved it. His younger sister did not. She removed her 3D glasses and hid her face.

It does end on a happy note. If your travel party can make it through all the scary/startling stuff, you are rewarded with a fun finale that includes cute visuals, which I will not spoil because they are not scary. Hopefully, it helps little ones who were terrified to forgive the early part of the show and have fond memories of it.

Overall, Animal Kingdom has lots of thrills, lots of animals, and lots of fun for everyone. Even if members of your travel party elect to skip most of the rides, there are plenty of gorgeous trails where you can view wildlife, renowned shows to take in, a substantial playground to enjoy, and characters to meet.

Want to Read About whether the attractions at other parks might be too much for you or someone in your travel party?

What Animal Kingdom attractions scare you? Have you ever been surprised by what did and didn’t scare you or a member of your party? Tell us about it on the Kenny the Pirate Facebook group by clicking here. You can also share this guide with your travel party by clicking the large blue facebook button below.