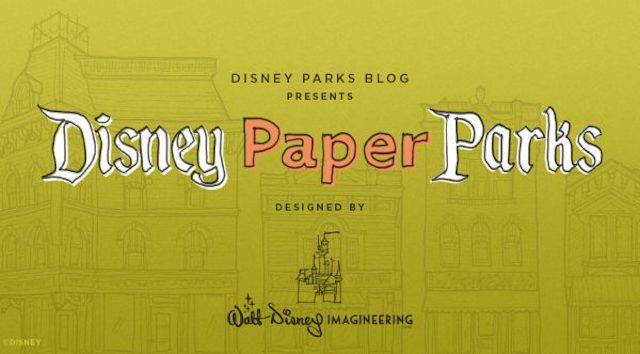 Do you have dreams of “being right in the middle of Main Street U.S.A.?” Disney Parks have created FREE printable that include some of the iconic buildings from Disneyland’s Main Street and it also includes parade float printables for Mickey’s Magic Happens parade. Find out more about this great resource.

In an effort to bring a bit of the Disney magic to homes across the globe, the Disney Parks Blog asked Stephanie Jazmines and Amy Young from the Walt Disney Imagineering Design & Planning Studio to help bring the magic of Main Street to the homes of Disney fans.

The Walt Disney Company has admired the countless ways that Disney fans have kept the magic alive even while Disney Parks remained closed. Some of these families were featured during The Disney Family Singalong volume 1 and volume 2 that premiered in April and May. The president of Walt Disney Imagineering, Bob Weis, shared the following:

“WE have always been inspired by the incredible passion of our disney park fans. Seeing your creativity and shared love for the experiences imagineers create has really lifted our spirits.”

All that you will need is your pirntalbes, scissors, and glue to bring the magic to your home. They have created the shops to line either side of Main Street U.S.A. including a few of the most iconic buildings from Disneyland including the Main Street Cinema. It looks as though “Steamboat Willie” is showing. Grab your popcorn bucket and head inside for the show.

for best results print the sheets to actual size rather than scaling them to fit the page.

You can also add the Crystal Arcade to your homemade Main Street. Imagine walking inside and peering through the mutoscopes to see silent films from 1920’s. Also including on these printable pages are fun pieces of Disney history that you may enjoy.

After you create your Main Street add a little fun by creating a few of the most loved floats from the Magic Happens Parade. This parade premiered on February 28, 2020 and our very own KennythePirate was their to share his experience with us.

The parade starts with our favorite pal, Mickey Mouse, dressed as a Sorcerer to help the Magic Happen. You can add a bit of creative flair to this parade float by coloring before assembly.

The next float on the parade route is Moana. I absolutely love the new Disney characters that are included in the Magic Happens parade. This float even includes Hei-Hei as he bounces around behind the float. Maui and Pua’s float is featured after that of Moana.

The stars of Coco join the parade route and when you see Coco on the stage you just can’t help but sing “Remember Me.” This printable is amazing and includes so many fun details from the actual parade float.

Find a link to all of these great printables and more HERE.

After you have completed your floats enjoy a virtual view of the Magic Happens parade and have your floats travel down Main Street along with the actual parade. This is such a fun way for Disney fans both young and young at heart to work together to make the Magic Happen in their homes.

Will you be creating this at home? Share your photos of your completed craft and some of your favorite photos from Disney parades with us on our Facebook Page.