Disney character sightings are slowly coming back. Check out the latest grand reopening of another meet.

If you have been to Disney World since last July, the only ways to see characters are from a distance, on a cavalcade, or during a character meal. It is not ideal by any means, but it was necessary during the initial reopening phase.

Disney recently announced the return of character meets with a few modifications. First, these are not close meets where you can get an autograph and hug them. Second, not every character experience has returned. Right now, we have a preliminary unofficial list, which you can see HERE.

Instead of calling this a character meet, Disney has changed all descriptions on the website to “sighting.” This is what those distanced character meets are called at the After Hours events and what we see occasionally when Buzz is on the Tomorrowland Stage or the princesses are in their respective pavilions in the World Showcase.

However, what makes these newly returned sightings different is that you now get some one-on-one attention indoors with these characters. So far, Mickey Mouse, the Princesses, and Disney Jr friends have returned.

Minnie Mouse is the most recent character sighting to return to Disney World. She is meeting at Hollywood Studios at Red Carpet Dreams. This is near Sci-Fi Dine-In Theater on Commissary Lane.

Kenny is in the park today to get a first look for us! Right now, the schedule lists her meet and greet times for 10:00 am to 5:30 pm. Be sure to follow Character Locator! Schedules may change without notice, and Kenny will keep the app updated with accurate times.

Minnie is meeting in her pink dress for her strut on the red carpet. Doesn’t she look so excited to see Kenny?

As a reminder, this is a modified sighting so masks are still required (it’s indoors), and you cannot get too close to them. Additionally, hugs and autographs are still not allowed.

If you have done this meet before, you know Mickey meets in his Sorcerer costume in the same building. Unfortunately, his sign is still covered and his location is empty.

You can meet Mickey at Magic Kingdom at Town Square Theater and at Epcot in the Disney and Pixar Short Film Festival. Hopefully Sorcerer Mickey will magically appear soon!

Did you miss seeing Minnie in her iconic pink dress? Let us know in the comments below and on Facebook. 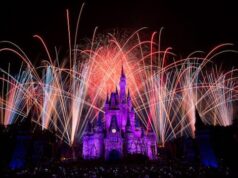