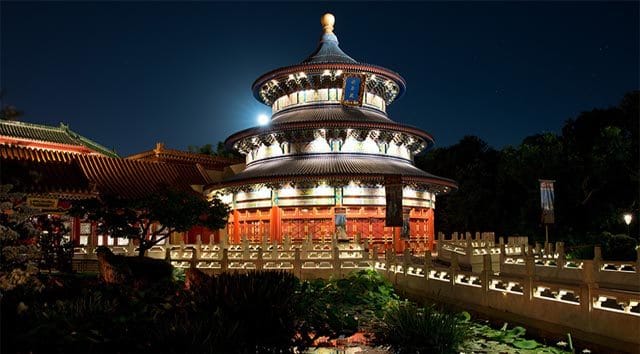 One of my favorite traditions while visiting Epcot around the holidays is for me and my youngest daughter to visit each and every Storyteller’s event during our trip to Epcot.

As a Sociologist, who teaches and studies culture, it makes my heart so happy to be able to partake in learning and participating in the vast array of Christmas traditions that countries practice around the world.

So far in our 12 part series, we have already visited the holiday customs and traditions from Canada, the United Kingdom, France, Morocco, Japan, Italy, Kwanzaa and Hanukkah.

Today, we continue our adventures to the festivities of China!

There is only about 1% of Chinese Christians living in China. Therefore, it is not practiced throughout the country. As we learned from celebrating Christmas in Japan earlier in the series, most of the Christmas decorations can be found in major cities.

Santa Claus is called “Shen Dan Lao Ren.” 聖誕老人, which translates to “Old Christmas Man.” Often times, the post men may dress up as Santa when delivering letters in the month of December.

A tradition that is becoming popular throughout China is gift giving apples on Christmas Eve. Many stores sell wrapped apples in colored paper.

People give apples on Christmas Eve because in Chinese, Christmas Eve is called “Ping’an Ye” (平安夜), meaning peaceful or quiet evening. It has been translated from the carol ‘silent Night’.

The word for apple in Mandarin is “píngguǒ” (苹果). The words sounds similar to the word for “peace”.

Therefore, the Chinese New Year marks the start of a new lunar year.

It’s a time to come together with families for feasting as well as a time to honor ancestors and wish for good fortune, prosperity, longevity, and happiness in the coming year.

“Hong baos,” or red envelopes are filled with small amounts of money. They also includes oranges, which is the fruit that is typically handed out during the festivities.

The Chinese New Year begins with the new moon, which consists of the slender crescent moon that is not usually visible on Earth. It falls between the end of January and the end of February.

Every Chinese New Year also represents one of the 12 traditional animals. 2020 is the Year of the Rat.

January 17, 2020 to February 9, 2020 marked the Lunar New Year celebration and events at Disney California Adventure Park at the Disneyland Resort.

There is an abundance of activities, food, music, and celebrations to ring in the Lunar New Year! I had the chance to visit during this celebration. You can read about it here.

In Chinese tradition, each dish has a special meaning. For example, some dishes are believed to bring wealth, while others bring good luck or family togetherness.

Here are a few symbolic dishes that are included in the Lunar New Year banquets:

Nian Gao: Rice cake. The character “gao” is pronounced the same way as the word “tall” or “high,” symbolizing a wish for every year to be “higher” and better than the last.

Noodles: chang shou mian (or longevity noodles) The noodles are left uncut and are meant to be slurped rather than chewed. You want the longest noodle as it means a long life!

Steamed Whole Fish: It is commonly a traditional dish eaten during the Lunar New Year. In Chinese, the word “fish” is pronounced “yu,” which is the same pronunciation for the word “surplus,” so eating fish symbolizes wealth and prosperity in the coming year.

There are a few rules when eating fish to bring the most luck in the coming year: The fish is always served with the head and tail intact. Also, the head should be placed towards the elders or distinguished guests at the dinner table.

Dumplings: They symbolize wealth and togetherness. Dumplings are shaped like ancient Chinese gold ingots. It is said that the more dumplings you eat, the more wealth you will have in the new year.

Spring Rolls: Their shape is reminiscent of gold bars and symbolize wealth and prosperity.

Sweet Rice Balls: These dumplings are known as tang yuan. They are typically eaten during both the Lantern Festival and the Spring Festival. Their round shape symbolizes family togetherness and completeness.

The dance of the Chinese Lion Dancer is a cultural tradition that dates back over 2000 years!

The dance is performed during Lunar New Year celebrations and other important holidays across China.

The dance of the lion expresses and represents courage, stability and triumph. It personifies reassurance and is a symbol of aspiration for the people.

The two person dance drives away evil spirits and negativity, bringing good luck and fortune to the community. The hungry lion eats and brings and spreads good fortune to all.

For our next adventure series, we will be visiting customs and traditions of Norway.

We will continue to learn the various traditions and customs that are practiced during the holidays throughout Epcot’s World Showcase.

I hope you join me on our next adventure! “Sheng Dan Kuai Le” 圣诞快乐’ ” (Merry Christmas!)

Did you learn any new traditions that are practiced in China during their festivities? Do you remember watching the Lion dancers? Let us know in the comments on Facebook and in our Facebook group.