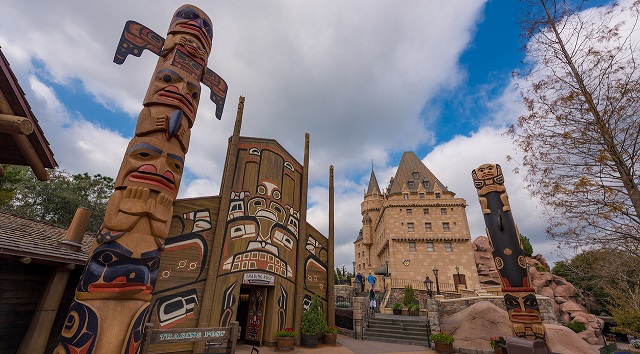 Christmas around Epcot’s World Showcase will look different this year as there will be no Storytellers. Follow along on my adventures as I share with you how each country in the World Showcase celebrates Christmas while looking back at the storytellers of years past. Today we focus on the Canada Pavilion.

One of my favorite traditions while visiting Epcot around the holidays is for me and my youngest daughter to visit each and every Storyteller’s event during our trip to Epcot.

As a Sociologist, who teaches and studies culture, it makes my heart so happy to be able to partake in learning more and participating in the vast array of Christmas traditions that countries practice around the world.

My youngest and I will not be able to continue our yearly tradition this year.

Although we are not able to see the Storytellers this year due to the pandemic, I thought the next best thing would be to take our readers on a journey.

Join me as we learn how Christmas is celebrated in the different countries that are represented in Epcot’s World Showcase.

Christmas Day is celebrated on the 25th of December in all of Canada.

The festivities and traditions are very similar to those practiced here in the United States.

Christmas decorations throughout the country include Christmas trees, wreaths, nativity scenes and other festive decorations.

Décor can be found inside and outside the home.

Festivities leading up to the holiday season are displayed by parades, performances and eating traditional holiday foods.

In provinces such as in Labrador and Nova Scotia, a unique tradition known as Mummers is practiced during the twelve days of Christmas.

Both adults and children wear masks while visiting houses during this time.

They make different noises such as ringing bells and making long noises while asking for candy and other treats.

Sounds very similar to Halloween and trick or treating, doesn’t it?

The traveling visitors remove their disguise and stop behaving MISCHIEVOUS if the hosts guess their identities correctly.

And like many other cultures, children are asked whether they have been good or bad throughout the year.

Many cultures, as we will soon learn, incorporate the idea of keeping tally on whether children have been naughty or nice throughout the year.

However, the way it may be practiced can be very different from culture to culture.

In Quebec, the 6th of January which is known as the Epiphany is celebrated with the “La Fete du Roi” (Feast of Kings).

The baked cake includes a small bean at the center. The lucky finder of the bean is the winner!

The tradition of the Epiphany is practiced throughout many countries who celebrate Three Kings Day.

We will soon learn in other countries around the World Showcase.

Traditional Foods During The Holidays

In Quebec, le Réveillon (which means waking), is a traditional French dinner.

The meal is traditionally served after Midnight Mass on Christmas Eve.

It is quite the feast which may include lobster, oysters, escargots, foie gras, turkey and tourtière (meat pie dish).

I always enjoyed taking a break from a long day of walking to enjoy this delightful live musical show.

Although the show is not considered to be a typical Christmas storytelling, the musicians explain the different Christmas songs.

The Christmas songs that are sung represent the different provinces across Canada.

For example, Quebec’s main spoken language is French and therefore, traditional Christmas songs would be sung in French.

The folk music and its beat will get you in the mood to want to get up and dance.

In years past, before the Canadian Holiday Voyageurs began to perform, the Canadian Pavilion hosted Nowell the Lumberjack.

His storytelling shares how Canada is very diverse in its people including the First Nations People, the French, English, German, Irish, Scots and Ukrainians.

Therefore, it is not shocking to learn that so many different traditions and customs are practiced during the Christmas season.

In some traditional Canadian homes, Santa Claus does not have elves but rather devilish creatures called Belsnickers. They are the keepers of checking to see whether children have been naughty or nice.

Story has it that the Belsnicklers enter the homes of naughty boys and girls to cause mischief.

Canada’s Inuit children are visited by Strange creatures called Naluyuks who travel from house to house.

The Naluyuks then pound sticks on the floor questioning the children about their behavior during the past year.

When the children respond that they have been good, the Naluyuks open special bags filled with gifts.

For our next adventure series, we will be visiting the United Kingdom.

We will continue to learn the various traditions and customs that are practiced during the holidays.

We will take a walk down memory lane as we remember the United Kingdom Storytellers who shared the joy of the holiday season.

My hope is that through the adventure series the spirit of the Storytellers and their beautiful holiday traditions will be enjoyed from the comfort of your own home.

I want to bring back the holiday memories of walking around the World Showcase while taking in the array of the holiday magic without having to walk 20,000 steps.

I hope you join me on our next adventure! Merry Christmas!

Did you learn any new traditions that are practiced in Canada during the holidays? Do you remember watching Nowell the Lumberjack and or The Canadian Holiday Voyageurs? Let us know in the comments on Facebook and in our Facebook group.