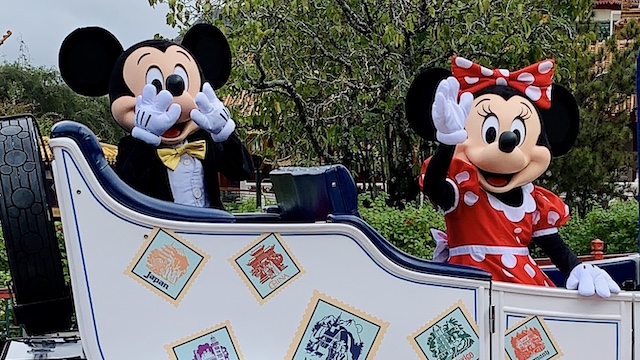 One of the Disney World cavalcades is coming to an end, and guests will no longer be able to see it come through the park. What are your thoughts on cavalcades?

Disney World cavalcades provide an opportunity for Guests to see some of their favorite characters in the parks. Since the meet and greet opportunities we know and love are temporarily on hold, this is Disney’s solution.

While most of the cavalcades have remained the same since they were introduced last July, there have been some changes.

We have seen several new cavalcades for Halloween, and Christmastime brought all kinds of new characters at Magic Kingdom, Hollywood Studios, Animal Kingdom, and EPCOT.

Chip & Dale and Daisy & Donald greet Guests in Disney’s Hollywood Studios. We have also recently seen the addition of Moana and Mulan to the Princess cavalcade in Magic Kingdom.

The Mickey and Friends World Tour cavalcade includes Goofy, Pluto, Mickey, and Minnie as they travel around the World Showcase in EPCOT. The Princess Promenade is the other cavalcade while most of the park primarily focuses on physically distanced interactions.

Anna and Elsa both take turns meeting in Norway while Joy and Pooh can also be spotted in the Imagination Pavilion. Alice and Mary Poppins also alternate meeting in the UK pavilion. Then, of course there are the characters to met at Garden Grill!

May 4 is the last day to see the Mickey and Friends World Tour Cavalcade.

What do you think about cavalcades? Are you sad to see the World Tour come to an end? Leave us a comment below or on Facebook.