Walt Disney World worked diligently to welcome Guests “Home” for the 50th Anniversary. See how Guests can now step into the magic before even stepping foot onto the Walt Disney World Resort property.

Disney is preparing for the 50th Anniversary Celebrations at Walt Disney World.  Mickey and Minnie Mouse will be seen in new outfits and illuminated displays will be seen on all 4 Theme Park icons including Cinderella Castle, the Tree of Life, Spaceship Earth, and the Hollywood Tower Hotel.

Be sure to check out the great 50th Merchandise Collections and also the new Beacons of Light that will illuminate Spaceship Earth. Walt Disney World has also installed 50 golden character sculptures throughout each of the four theme parks.

Even Disney transportation has received a bit of a magical transformation for this golden anniversary. Be sure to check this out HERE.

These decorative touches truly set the stage for “The Most Magical Celebration.” Now Guests can step into the magic of this golden anniversary before even stepping foot onto the Walt Disney Resort property.

Walt Disney World has now extended this magical celebration to the Orlando International Airport. As soon as travelers land in the airport they can step into the magic of Disney.

Guests are greeted with a few of the Fab 50 statues that are found throughout the Walt Disney World Theme Parks. Our favorite lion cub, Simba, is a fun welcoming surprise for Guests as he “just can’t wait to be king.”

Don’t forget to have your camera or phone ready to snap a few pictures. Guests can celebrate their “very merry unbirthday” while posing with a golden teacup inspired by the Mad Tea Party attraction.

This magical overlay will remain in place now until March 2022. We absolutely love that the magic of the 50th Anniversary will now greet Guests as soon as they land at the Orlando International Airport.

This magical overlay will remain in place now until March 2022 at the Orlando International Airport.

What do you think of this magical overlay? Will you be flying into the Orlando International Airport for your next trip to Walt Disney World? Do you remember when the airport received an overlay for the opening of Star Wars: Galaxy’s Edge a couple of years ago? Share your thoughts with us on our Facebook Page. 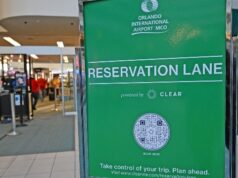 Now you can reserve a time for… airport security? 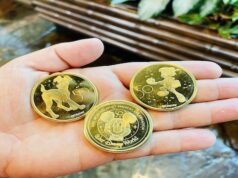 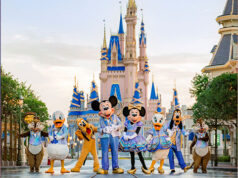