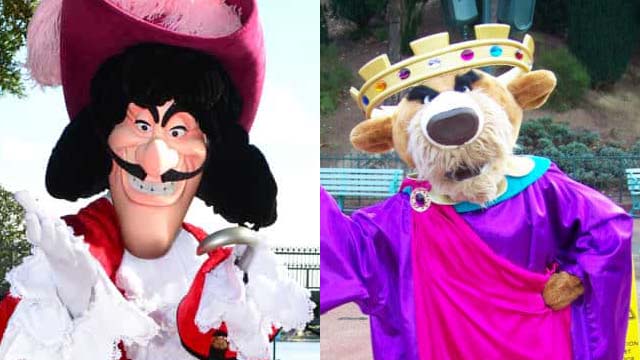 It’s day three of the March Badness Tournament. Now is the time to see who won yesterday’s match-up and vote for your favorite in today’s Disney Villain match-up. Read on to vote!

This is our fourth tournament. Previously, you have crowned your favorite Disney Attraction, Character, and Restaurant. Round one of March Badness continues with the third match-up.

Governor Ratcliffe took the win yesterday. Check out the results below!

I was not expecting this outcome. I had my guess that Frollo would beat out Governor Ratcliffe. My bracket is busted already! Anyone else already have a busted bracket? Below you will find an updated bracket.

We are still in the Male Villain Category. Today’s match-up is Captain Hook vs Prince John.

You can catch this movie on Disney+. Also, be sure to catch Captain Hook the next time you are in Magic Kingdom. You can follow the story of Peter Pan and catch a glimpse of Captain Hook on Peter Pan’s Flight.

Prince John is from Disney’s 1973 animated film, Robin Hood. Robin Hood steals from the rich to feed the poor. Robin Hood has to outsmart Prince John and help the people of Sherwood Forest find happiness again.

Prince John will be crying for his mommy and sucking his thumb, he is a bit of a crybaby, once Robin Hood gets to his riches. I really enjoy this film, it is definitely one of my favorite animated Disney films.