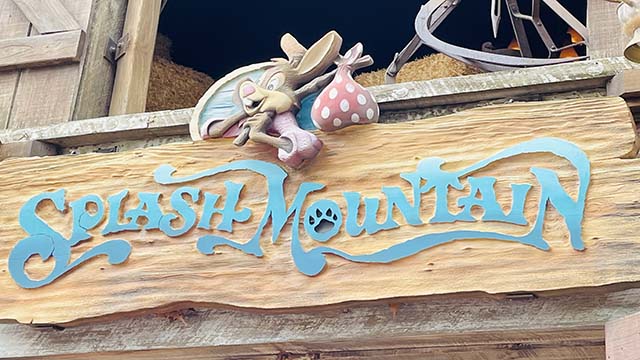 Last year, Disney announced Splash Mountain would be rethemed in order to be more inclusive. While we don’t have a specific timeline, Splash Mountain references are already being removed. What do you think of these changes?

Elements of the attraction are being removed from Magic Kingdom.

Removed from the Park

Don’t worry, Splash Mountain is still there and operating! There is no begin date for this project, but it has been over a year since the original announcement. We have not heard much about the project since late last year.

However, the song “Zip-A-Dee-Doo-Dah” from the movie Song of the South and Splash Mountain attraction has been taken out of the welcome show. “Let the Magic Begin” plays every morning at the Magic Kingdom as Guests anxiously await to ride their favorite attractions.

“Zip-A-Dee-Doo-Dah” is no longer part of the Magic Kingdom welcome show.

When will the refurbishment begin?

Despite this new development, I don’t think Splash Mountain will close any time soon. The 50th anniversary of Disney World is just around the corner, and crowds will be flocking to celebrating.

I do not think Disney can afford to have one of the big headliner attractions in the park to be closed. Everything should be up and running to accommodate everyone since the parks (especially Magic Kingdom) will be so busy.

I do think Disney is trying to do what it can to take out these elements as a sign of what’s to come.

Join the discussion! Do you think the retheme will take place before or after the 50th anniversary? What do you think of these changes? Share your thoughts with us in the comments below or on Facebook.