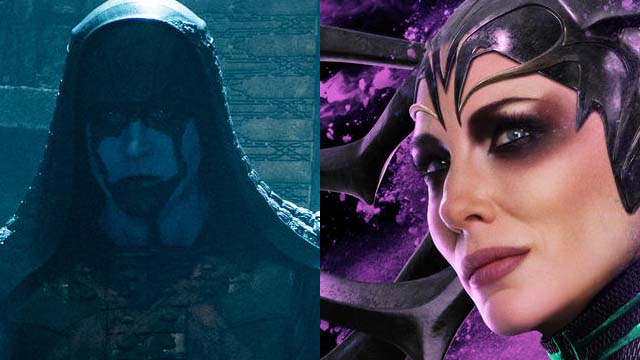 Marvel fans assemble! We have moved on to the Marvel villains in the KtP March Badness tournament. Now is the time to see who won yesterday and vote for your favorite in today’s Disney Villain match-up. Read on to vote!

This is our fourth tournament. Previously, you have crowned your favorite Disney Attraction, Character, and Restaurant. Round one of March Badness continues with the fourteenth match-up.

Loki won yesterday’s match-up and will be moving on to the Sweet 16! Check out the results below!

An updated bracket is shown below.

We are in the second match-up of the Marvel villains category. Today’s match-up is Ronan vs. Hela.

Ronan is the Supreme Accuser of the Kree Empire. He is probably best known to fans as the main villain in the 2014 Marvel film, Guardians of the Galaxy. Many of his family members were killed in the Kree-Nova War, and his hatred for Xandar became strong.

When a peace treaty was signed with the Nova Corps of Xandar, he became disgusted and decided to destroy all Xandarians. He begins working for Thanos by helping him search for the Orb. When he learns the orb contains an infinity stone he decides to take it for himself, but he is defeated by the Guardians of the Galaxy.

Will we see Ronan featured in the upcoming Guardians of the Galaxy roller coaster that will be coming to EPCOT? Even if he’s not featured, I cannot wait for this ride to open!

Hela is Odin’s first born. She was Asgard’s Executioner and Goddess of Death. She helped her father bring on death and destruction throughout the Nine Realms.

Hela becomes imprisoned by her father after he realizes a life of death and destruction will only lead to war. After Odin’s death, Hela is able to free herself, and she begins a quest to take Asgard back and then the Nine Realms. She will stop at nothing and soon faces her brothers, Thor and Loki, in battle.