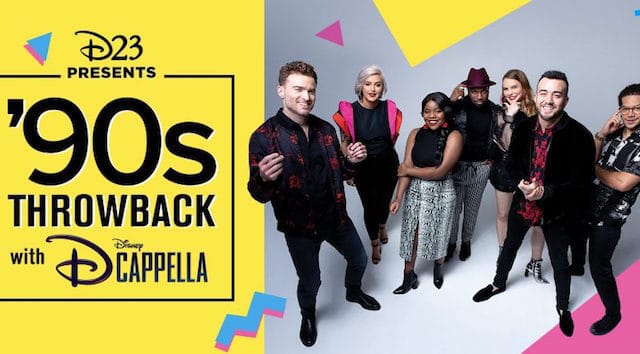 If watching last night’s Disney Family Sing-Along warmed your heart and soul, you will definitely want to tune in today for a 90’s Throwback DCappella performance presented by D23. Read on for when and how to watch so you won’t miss out on this exclusive concert.

DCappella is Disney Music Group’s a cappella singing sensation that debuted on the “American Idol” stage during Disney Night in 2018.

DCappella features seven world-class vocalists and is known for their reimagined classics from the Disney songbook.

D23 tells fans to “Get ready to relive some of your ’90s Disney musical favorites as DCappella virtually comes together to talk with D23 about some of their favorite melodic Disney memories, answer some musical Disney trivia and share an exclusive at-home rendition of Aladdin’s ‘Friend Like Me!'”

The show is airing on three locations:

For $99 a year, D23 offers a Gold Membership that includes an annual gift, quarterly publication, and access to VIP events.

After the concert, D23 is encouraging Disney fans to watch their favorite 90’s musical on Disney+ and share it using #AtHomewithD23 and #DisneyMagicMoments.

There are so many nostalgic 90’s Disney songs and I can’t wait to hear what DCappella decides to perform for us. I am personally hoping for something from Beauty and the Beast.

If you are looking for some additional musical Disney Magic Moments you should check out the Epcot Jammitors and Disney Broadway Stars performing “Go the Distance.”

Tell us the songs you are hoping to hear in the comments below, on the Kenny the Pirate Facebook Page or in our exclusive KtP Crew Facebook Group!

Jess is an experienced Disney traveler, wife, mom of two beautiful girls, and golden-doodle Maui. Disney World has always been her Happy Place. She embraces the motto ‘Hakuna Matata’ and looks forward to sharing her love of all things Disney with you!