While Universal Orlando Resort has not yet given an official opening date for the new “Bourne Stuntacular” show, they are doing Team Member previews this weekend! Read on for more information.

The preview is being referred to as a “technical rehearsal” and the release indicates that some aspects of the show may be offline or unavailable as adjustments are being made.

Generally speaking, a Team Member sneak peek should come just before the show opens to the public! So, perhaps this show will be available to travelers for the upcoming Spring Break Season!

Universal Orlando’s official site doesn’t have much information, but indicates an opening date of Spring 2020.

From the Universal Orlando site, the Bourne Stuntacular will be “a cutting edge fusion of stagecraft and film, you’ll follow our hero Jason Bourne across three continents as sinister characters pursue him, hoping to bring him in.”

Each day from 3:15-4:45 p.m., Team members are permitted to attend the show on a first come, first served basis. They are not allowed to bring guests for the show.

As a Universal Orlando Annual Passholder, I’m looking forward to this stunt show! It sounds to me like it will be like a 2020 version of the Indiana Jones show at Hollywood Studios!

I like Universal Orlando resort best for older kids, adults and anyone who loves a great water park. The Annual Passes are so affordable and they allow out of state guests to make payments on certain passes, which makes it even more palatable.

I can’t wait to see what they do with Epic Universe! Kenny the Pirate will continue to keep you updated on the new park, as well as the existing parks!

Are you excited for this upcoming show? Let us know in the comments on Facebook! 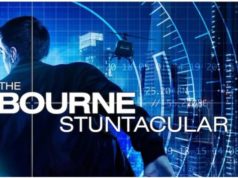