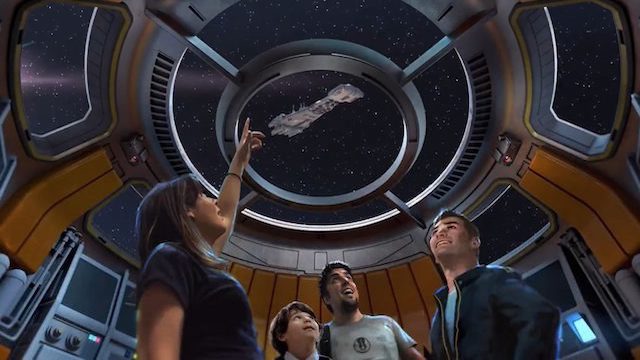 Are you wondering what a voyage on the new Star Wars: Galactic Starcruiser will be like? Have a look at the itinerary for these voyages. Does this itinerary make you excited to experience the Starcruiser, or do you think this won’t be worth the cost?

Star Wars fans are awaiting all of the news and announcements that have been released for the brand new Star Wars: Galactic Starcruiser. Guests visiting Star Wars Galaxy’s Edge discovered a new development near the Galactic Starcruiser. Previously this location was covered with scrim. This completely covered the entrance and blocked Guests’ views.

Guests departing on March voyages have now been able to view the itineraries for their stay. The itinerary can be viewed on the Datapad, which is part of the Play Disney Parks app.

On Day 1, Check in is available from 1:00 to 4:00 pm. A lunch buffet will be available in the Crown of Corellia Dining Room. Guests can also take Sabacc Lessons, Explore the Starcruiser, get a Datapad Orientation, and take part in a Galactic Social. Much like an actual cruise, there is also a Ship Muster on Day 1.

Guests will also take part in a Captain’s Reception, an Outer Rim Regalia, and can even take Ryloth Dance lessons! Dinner is served that evening in the Crown of Corellia Dining Room, with a performance from Gaya.

There is even a special Chandrilla Star lines “Starshow” at Bespin.

Day 2 starts off with two different breakfast options. Guests can sit down for a breakfast buffet in the Crown of Correlia Dining Room, or get a Grab-and-go breakfast at the Sublight Lounge.

Batuu Transports will be available from 8:40am to 4:00 pm for Guests wanting to take a planetary excursion to Batuu. Guests who prefer to stay on the ship will have lots of afternoon activity options as well.

Dinner will be offered again in the Crown of Corelia Dining Room. Dinner features a “Taste Around the Galaxy” followed by a Halycon Starcruiser Celebration and Sweets & Treats later on.

Day 3 is disembarkation, so there isn’t much on the agenda. Guests can get either a Grab and go Breakfast or sit down for the Breakfast Buffett before they disembark.

What do you think of the itinerary for Star Wars: Galactic Starcruiser voyages? Let us know in the comments below, or tell us on Facebook.

Why is Mickey’s Not So Scary Halloween Party more expensive?