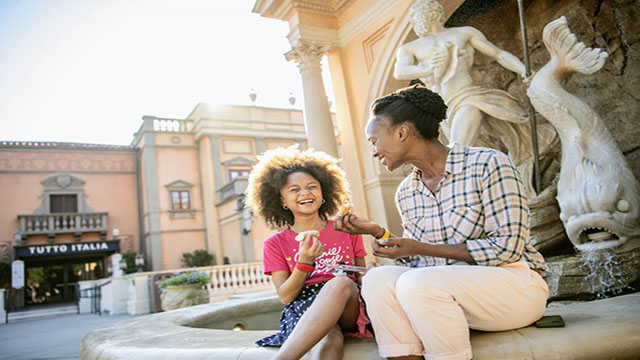 Epcot’s International Food and Wine Festival is only about a month away! Disney has announced the full lineup of food booths that will be at this year’s festival. Take a look and see which ones you want to try.

This year, CORKCICLE is the official sponsor of the festival. There will be a Shimmering Sips Global Marketplace and four other locations during the event where you can discover several sparkling beverage options available for purchase in an exclusive keepsake CORKCICLE premium beverage container.

Check out some of the other fun merchandise coming to the festival in this post HERE.

New Global Marketplace concepts are coming to Morocco, The American Adventure and throughout the park in July, with even more marketplaces opening in the fall. T

Disney has announced the lineup for all of the Global Marketplaces. Let’s take a look! Some food booths, like the Brew-Wing, Rotunda Bistro, and Tangierine Café: Flavors of the Medina will be located indoors, so do not forget about those.

There will be eight NEW food booths introduced at this year’s festival along with many others opening on October 1st. What could possibly be going on at Walt Disney World on October 1st (wink wink)?

Australia
Embark on a culinary journey Down Under as you sample popular Australian dishes.

Brazil – Opening October 1
Dig into South American cuisine and culture with the Land of the Palms’ finest fare.

Brew-Wing at the Epcot Experience – NEW!
Explore an array of crowd-pleasing picks like chicken wings and flatbreads—along with assorted beers and ciders.

The Donut Box
Choose from an adventurous assortment of donuts, as well as refreshing beverages.

Flavors from Fire hosted by The NFL on ESPN
Score a touchdown of flavor with hearty dishes that are sure to tackle the toughest appetite.

France
Fall in love with the classic cuisine of France—along with assorted wines or a slushy cocktail.

Germany
Venture to Germany for Bavarian bites sure to sate foodies of all ages—every dish is köstlich!

Hawaiʻi
Traverse the Pacific for tropical flavors and island favorites both savory and sweet.

Italy
Savor the simple elegance of cucina italiana, with some of the world’s best-loved food and wine.

Japan
Delight your appetite with sushi and other delish dishes, as well as libations from the Land of the Rising Sun.

Kenya – NEW! Opening October 1
Set off on a safari of flavor as you enjoy traditional Kenyan food and beer.

Lobster Landing – NEW! Opening October 1
Get a taste of New England as you indulge in luscious lobster creations.

Mexico
Take your taste buds south of the border as you enjoy chilaquiles, tacos, Mexican craft beer and margaritas.

The Noodle Exchange – NEW!
Savor the flavors of the Far East served up in delicious noodle dishes.

Refreshment Outpost
Nibble like there’s no tomorrow—stop by for satisfying snacks and beverages to go.

Shimmering Sips hosted by CORKCICLE®
Get the brunch party started! Sample sweet treats and mimosas mixed with the perfect twist.

The Swanky Saucy Swine – NEW!
Try out tantalizing pork dishes along with wine, beer or a cocktail.

Tangierine Café: Flavors of the Medina – NEW!
Treat your senses to traditional Moroccan cuisine, like grilled kebabs and a falafel pita.

Which food booth are you looking forward to trying? Will you be visiting Epcot’s Food and Wine Festival this year? Tell us about it in the comments below or on our Facebook page.