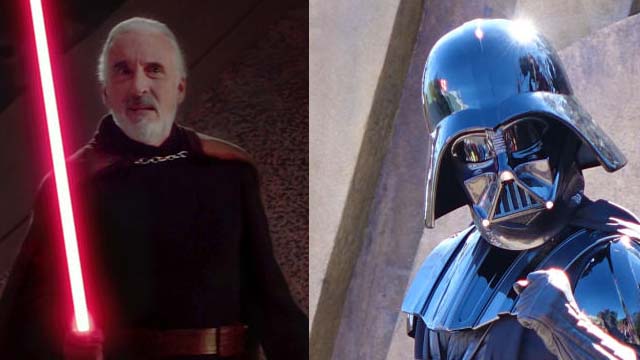 It’s day twelve of the March Badness Tournament. Now is the time to see who won yesterday and vote for your favorite in today’s Disney Villain match-up. Read on to vote!

This is our fourth tournament. Previously, you have crowned your favorite Disney Attraction, Character, and Restaurant. Round one of March Badness continues with the match-up number twelve.

Boba Fett won yesterday’s match-up by a long shot and will be moving on to the next round. Check out the results below!

An updated bracket is below.

We are now in the final match-up of the Star Wars Category. Today’s match-up is Count Dooku vs. Darth Vader. Have we saved the best for last for this category? That’s up to you to determine!

Count Dooku was a Jedi master but fell to the dark side. He was trained by Yoda, but he eventually began questioning the ways of the Jedi and began to rebel against the Galactic Republic. After joining the dark side, he became a disciple to Darth Sidious and took on a secret name of Darth Tyranus and became a leader of the Separatist Army.

Dooku recruited a bounty hunter, Jango Fett, to assassinate Padmé Amidala. It’s not long before Count Dooku finds himself in a duel with Anakin and Obi-Wan Kenobe. During the duel, Count Dooku cuts off Anakin’s arm!

Darth Vader was a Jedi, but he followed a path to the dark side. After being defeated in a battle with his own master, Obi-Wan Kenobe, he was taken under a new master, Darth Sidious, who he would continue to serve for decades.