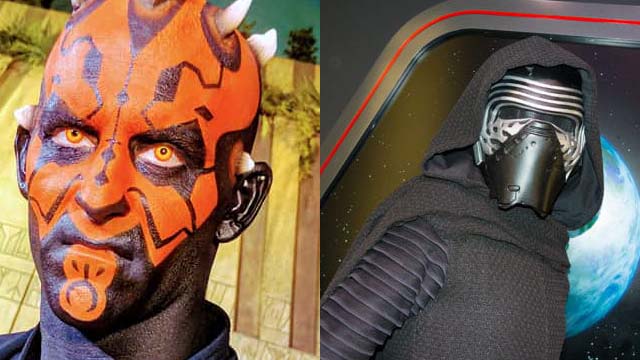 Yesterday, we finished Round 1 of the Female Villain Category. Today we are moving on to the Star Wars category. Read on to vote!

This is our fourth tournament. Previously, you have crowned your favorite Disney Attraction, Character, and Restaurant. Round one of March Badness continues with the third match-up.

The Evil Queen won her match-up against Yzma yesterday. Check out the results below!

This match-up was closer than I thought it would be. However, I do think The Emperor’s New Groove doesn’t get the recognition it deserves.

Check out the updated bracket below. How is your bracket doing?

Today is the first day of the Star Wars Villain Category. First match-up is Darth Maul vs Kylo Ren.

Darth Maul is first introduced in Star Wars: Episode I – The Phantom Menace. He is ordered to capture Queen Padme Amidala and make her sign a treaty.

He is easily recognizable with his unique look and double-bladed light saber. Darth Maul killed Jedi Master Qui-Gon Jinn but then was defeated himself by Obi-Wan Kenobi.

Kylo Ren is first introduced in Star Wars: The Force Awakens. He is the son of Han Solo and Princess Leia. He was born as Ben Solo, however, he changed his name to Kylo Ren.

He was trained by his uncle, Luke Skywalker, as a Jedi. Kylo Ren then turned to the dark side. The power of the dark side is strong and enticing, and Kylo Ren wants to be as powerful as Darth Vader, his grandfather.