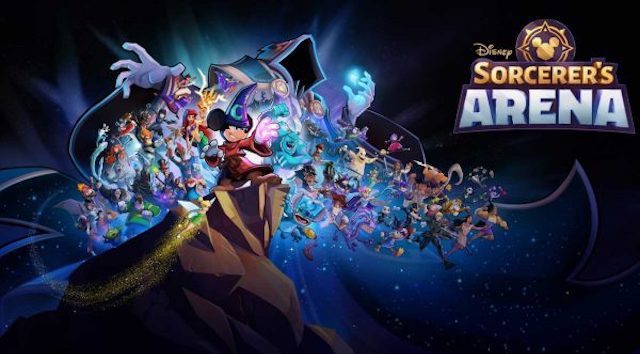 We are all looking for ways to Disney-fy our Downtime, and now there is a new FREE app that brings home a bit of Disney fun to your own home. Read more about this new app so you can step into the magical world of Sorcerer Mickey.

Step Into The Magic

Disney’s Sorcerer’s Arena welcomes guests into the Disney Parks where they are able to choose the Disney or Pixar character that they would like to use in the quest to become legendary.

You can collect the following characters:

Each character offers a powerful weapon in order to help bring order to the Kingdom. This game will have you wanting to unlock even more characters to aid in your quest to help you win in the arena.

There are also other characters that can be unlocked during special events. For example, there is a current event called “Path of Peril” that is in honor of the new Pixar film Onward (that is now available on Disney+.)

By completing levels of this challenge, you are able to unlock the following characters:

You enter into different levels and you are to attack those who are coming against the kingdom. In the very first level is Ariel. You have to use Ariel’s powerful trident to combat the villains. Sorcerer Mickey also appears to give a helping hand.

If you are attacked, then your health will decrease. You can use Ariel’s healing ability to keep your allies (in this case, Sorcerer Mickey) from being defeated.

As a bonus at the end of each battle, you are greeted by magical Disney fireworks. That alone is reason enough to move onto the next level.

After each battle, you receive a reward. You will be able to exchange these rewards to unlock even more powerful characters. After the first round, I was able to unlock Sully, the Master Scarer.

The fun continues as you continue into each new battle and unlock new characters along the way.

You are even able to step inside the Disney Parks and take part in magical spells that are inspired by classic attractions such as Splash Mountain Soak and Big Thunder Mountain Boom. This is such a fun way to enjoy some of the magic of the Disney Parks even while the Parks are indefinitely closed.

The Disney Sorcerer’s Arena is a free app that is available on the App Store and it is also available on Google Play. With new challenges and fun, new characters being added, this is a fun game for both the young and the young at heart to be able to enjoy.

ve you played Disney’s Sorcerer’s Arena yet? What do you like most about it? What character are you most excited to add to your team? Share your thoughts with our KtP Planning Crew and on our Facebook Page.