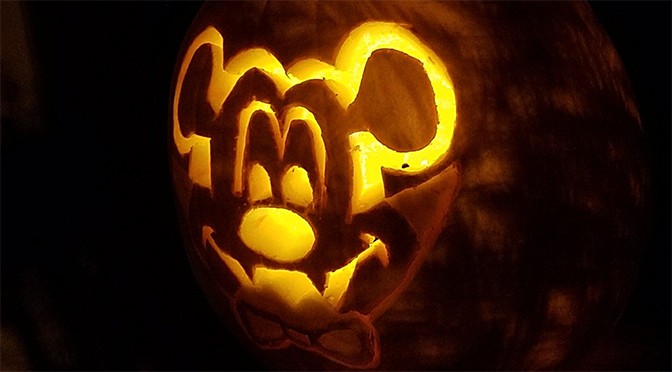 Debbie decided she wanted a Disney themed Jack-O-lantern for Halloween, so we gave it some thought and came up with Vampire Mickey.  Here’s how we created this adorable little Halloween pumpkin.We found some images that we liked from the internet and then I tasked Jordyn with drawing one up.  She drew this free form and did not use a template cover sketch.  She’s crazy talented when it comes to doodling.  All those Animation Academy classes came in handy for her.  I still can’t use my shoulder to draw a circle!  We sort of figured we would label what we would remove and keep.  S was to be Skin and F was for Flesh.   I made copies of the artwork, this is one of the copies. I removed the top of the pumpkin and Debbie gutted all the seeds and strands from the inside.

After cutting out the outline of the Mickey, I used a sponge to dampen the paper and place it on the pumpkin.  I used a few stick pins as well to hold it in place.  You could just do a colored version of this and stick it out front and still have a pretty awesome Jack-o-lantern. I used those cheap little carving saws, an exacto knife and a sharp kitchen knife for the carving.  I was almost 3/4 of the way around carving away when I realized that I was totally cutting out the Mickey head.  Oops!  Good thing I stopped at the bottom of the bow or I’d be showing photos of the cutout.  I also accidentally trimmed off Mickey’s chin.

I used the exacto knife to remove the flesh portions, as I didn’t have the special tool that carvers use for pumpkin skin removal.  It took a little longer, but it turned out pretty well. We inserted a standard small flashlight inside and turned out the lights and overall Vampire Mickey turned out really well. We debated whether we should entirely cut out the ears, make it flesh only or leave on the skin.  If you look at it a certain way, it kind of looks like Shrek ears, but we wanted something unique.