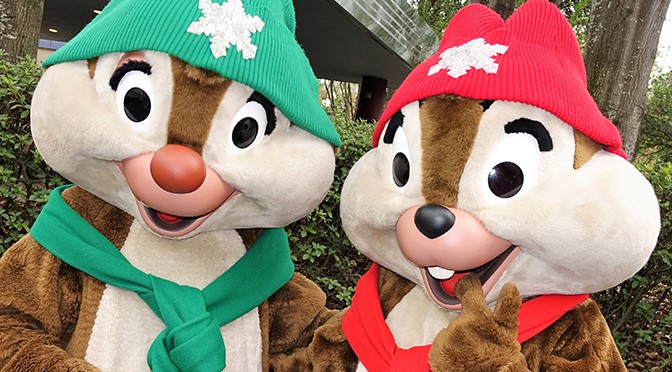 Chip n Dale’s meet and greet at Hollywood Studios received an upgrade for the Christmas Season with some new costuming.  Here’s some photos:

As I was making my way around Disney’s Hollywood Studios today, I noticed that Chip n Dale were wearing some new costuming for the Christmas season.  I had to do a double take.  Initially I thought they were the same ones they wear at Animal Kingdom, but noticed some differences.

Here’s a photo of the costumes Chip n Dale wear at Disney’s Animal Kingdom park.  Dale wears a green cap and red scarf as Chip wears a red cap with green and red scarf.  Each has some snowflakes upon their caps. As you can see the new costumes feature a large snowflake on each cap with the same snowflake embroidered on the bottom of the scarf.  Dale is in all green and Chip is in all red. We discussed their new accessories and how it would come in handy this weekend with lows predicted into the 40’s.  That may not seem like a big deal in the Northern states, but that’s pretty cold here, especially in November.  Everyone will be wearing beanie caps just like Chip n Dale this weekend. Hope you enjoyed the photos of the chipmunks and drop by and see them at Hollywood Studios before the new year!  You’ll always find their location, meet times and interaction tips on Character Locator!

Feel free to share on your social media so others can see the new costuming as well.