It’s Hispanic/Latinx Heritage month! Disney is sharing when we can expect to see the new Coco scene in Mickey’s PhilharMagic. But first, they will have to close the attraction! They are also celebrating this special time with other events and offerings.

September is Hispanic/Latinx Heritage Month, and Disney is celebrating throughout the theme parks and resorts! From Disney Parks Blog:

Head over to the Mexico pavilion at EPCOT and stop by the Mexico Folk Art Gallery. Don’t forget to enjoy something delicioso to eat and drink. You can also take in a performance from Mariachi Cobre who’ve added songs from “Coco” to their show at the America Gardens Theater.

If you visit during the EPCOT International Food & Wine Festival, from October 1 – 4, you can see the band Latin Ambition do a special performance at The American Gardens Theater.

Guests staying at a Disney Resort Hotel can end the night with la familia watching Movies Under the Stars.  The resorts will show several movies inspired by Latin culture and Hispanic and Latinx talent – featuring “Elena and the Secret of Avalor,” “Coco,” and more!

Mickey’s Philharmagic is a 3D film that can be seen in Fantasyland inside Magic Kingdom.  Although Donald tries to steal the show, Mickey is the true star!

Guests are taken on an adventure through classic Disney films as Donald tries to regain Mickey’s Sorcerer’s hat. Lion King, Little Mermaid, Aladdin…all the classic 90s era movies are there!

Back in July, we shared that the show would receive an exciting update: Coco! Read that news HERE.

However, they will need to close the attraction for a brief period to prepare for the new addition! Mickey’s Philharmagic will close on October 11 and reopen to Guests on November 12.

Mickey’s Philharmagic will close on October 11 and reopen to Guests on November 12.

Be sure to see our master list of scheduled refurbishments HERE.

Are you excited for this new scene? Will you be celebrating Hispanic/Latinx Heritage Month at Disney World? Let us know! 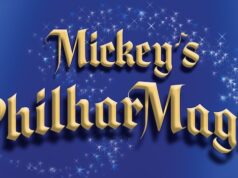