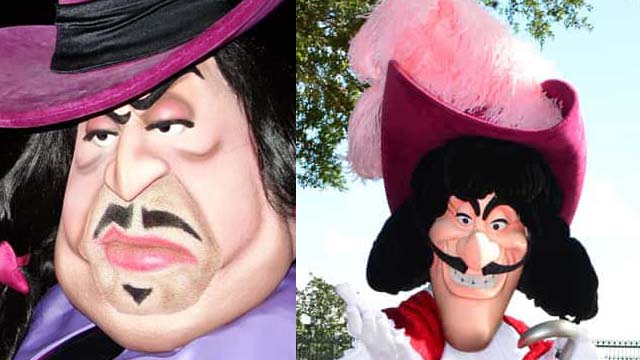 We are in the Sweet Sixteen of the KtP Villain’s Tournament! Or should we say, “Not so sweet” Sixteen? Now is the time to see who won yesterday and vote for your favorite in today’s Disney Villain match-up. Read on to vote!

This is our fourth tournament. Previously, you have crowned your favorite Disney Attraction, Character, and Restaurant. Round two of March Badness continues.

Clearly, no villain WINS like Gaston! Gaston won yesterday’s match-up. Check out the results below!

Below is an updated bracket.

We are in the second round of the March Badness tournament. We continue with the Male Villain Category. Today’s match-up is Governor Ratcliffe vs. Hook.

You will find Governor Ratcliffe in the 1995 animated film, Pocahontas. He is portrayed as greedy, self absorbed, power hungry and on a search for gold.

He will stop at nothing to get his way and he has no problem with getting rid of anyone who stands in his way. In this case, it’s the Native Americans.

Though gold is not found in Virginia, he leads his men on an exhibition to find gold and, at the end even betrays his own men.

Ratcliffe was briefly seen in the parks during the Sorcerers of the Magic Kingdom game that once took place in the Magic Kingdom. Sadly, this game has been shut down for good, and you can read about that here.

You can catch this movie on Disney+. Also, be sure to catch Captain Hook the next time you are in Magic Kingdom. You can follow the story of Peter Pan and catch a glimpse of Captain Hook on Peter Pan’s Flight. Captain Hook can also be seen wandering the decks of a Disney Cruise, so keep your eyes out for him.