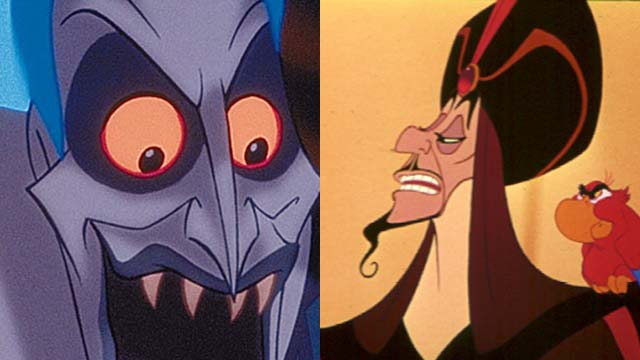 It’s day four of the March Badness Tournament. Now is the time to see who won yesterday’s match-up and vote for your favorite in today’s Disney Villain match-up. Read on to vote!

This is our fourth tournament. Previously, you have crowned your favorite Disney Attraction, Character, and Restaurant. Round one of March Badness continues with the fourth match-up.

Hook took the win yesterday! Check out the results below.

It’s pretty obvious that this Pirate crew is all about Captain Hook! This was a pretty easy choice for me. How about you? Below you will find an updated bracket.

We are still in the Male Villain Category. Today’s match-up is Jafar vs Hades.

Jafar is from the 1992 Disney animated film, Aladdin and also appears in the 2019 live action film. He is the Royal Vizier of Agrabah, and the Sultan’s “most trusted and loyal advisor”. Despite his “loyalty” to the Sultan, he has alternative plans to eventually take over as Sultan and rule all.

Hades is from Disney’s 1997 animated film, Hercules. He is portrayed as one of the coolest, laid back villains. He is a fast talking, cool kind of guy and early on in the film, he is introduced and greets everyone with a “Name’s Hades, Lord of the Dead. Hi, how ya doin?”

He has a grudge against his brother, Zeus and develops a plan to take over Mount Olympus. However, it’s not too long before he is foretold that a hero will get in his way, and he tries everything he can to stop Hercules.

New signs indicate the reopening of another Magic Kingdom restaurant