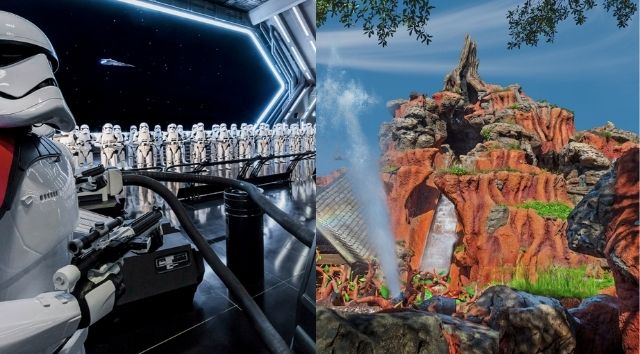 Vote for your favorite Walt Disney World attractions in our first ever KennythePirate Attractions Tournament! We are voting on round 3’s “thrills” bracket of the tournament now, so come cast your vote and see which attraction won yesterday!

Here are the attractions we will be voting for during this tournament. We’re working to find the ultimate “thrills” attraction in this category!

That was another close one! In the end, Avatar Flight of Passage will advance to round 4!

How did we define “thrill” rides?  When most people think of these attractions, they think of rides that are terrifying and get your heart pumping!  However, the simplest definition of a thrilling attraction is: “an amusement attraction that is very exciting.”

WARNING: THIS CATEGORY WILL BE A CHALLENGE!  THERE ARE SO MANY LOVED ATTRACTIONS HERE, AND UNFORTUNATELY, ALL BUT ONE WILL NEED TO BE ELIMINATED.

Splash Mountain is located in Magic Kingdom. This ride takes you on an adventure through the Briar Patch, where you’ll meet a delightful cast of characters that take you to the Laughing Place. You will get wet as you plummet down in into the Briar Patch!

We recently learned this ride will undergo a complete “reimagination” as its theming is changed to “Princess and the Frog.” Since this has not yet begun, we’ll vote on the ride as it currently is.