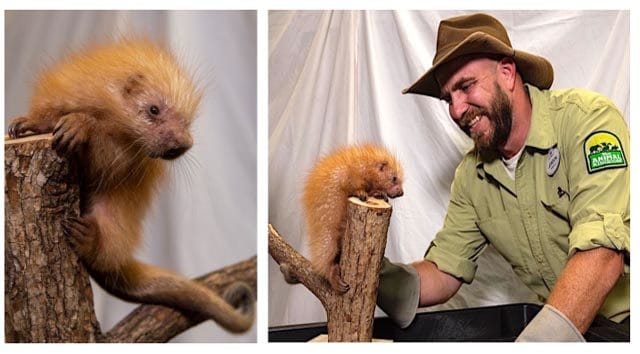 Even with Disney parks and resorts closed, there is still a lot going on behind the scenes. Animal Kingdom has just welcomed a baby porcupine, and you may have already seen her!

The animal care team is still taking care of the animals who call Disney World home. Disney just announced the arrival of a baby prehensile-tailed porcupine! Look how cute she is!!

A baby porcupine is called a porcupette, and she was recently born on February 25. Her mom is Peri, and as you may recall, Peri was featured on a recent episode of “One Day at Disney.” The little porcupette was seen on an ultrasound with Disney veterinarian, Dr. Natalie.

Peri was also featured on an episode of Good Morning America.

Check out this adorable video of the baby porcupine!

According to Disney Parks Blog, porcupettes are covered in a fine red fur coat, but they’re also born with their tiny quills underneath, which begin to harden hours after birth. Those quills are actually what helped the team determine the baby’s gender.

Coming to this conclusion required science and more than just a neonatal exam from the veterinary team. Prehensile-tailed porcupines have internal sex organs, so to determine the baby’s gender, the team actually had to send some of her tiny quills off to a lab for DNA testing.

As with all of the animals at Disney World, there are plenty of big hearts caring for this little mother-daughter duo. Peri continues to thrive in her role as a mother, which is part of why she was chosen to breed through the Species Survival Plan (SSP).

This program is overseen by the Association of Zoos and Aquariums (AZA) and ensures responsible breeding and genetic diversity of thousands of species of animals.

Peri and her baby reside at Conservation Station at Disney’s Animal Kingdom. Be sure to visit them on a future trip!

What do you think of Peri and her new baby? Do you enjoy seeing all of the behind-the-scenes action while the parks are temporarily closed? Let us know on facebok.