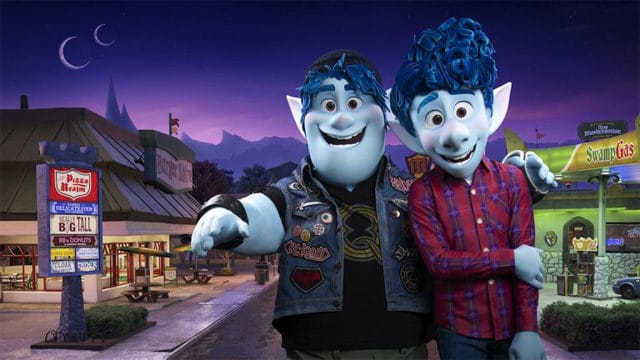 Ian and Barley from Disney and Pixar’s latest film, “Onward,” will soon be meeting guests!

Set to be released on March 6, 2020, the film follows two brothers, Ian and Barley Lightfoot, as they set out to discover if there is still magic in the world that can help them spend one more day with their deceased father.

It will have an urban fantasy feel as elves, trolls, mermaids, goblins and other mystical creatures use modern technology instead of magic.

Check out the official trailer below:

Guests will soon start seeing more of “Onward” in the Disney Parks!

Sneak Peeks of the Film

For a limited time, beginning February 7, 2020, Disney has announced guests visiting Disney Parks will get an early glimpse of scenes from Pixar’s “Onward.”

Guests aboard Disney Cruise Line can also catch this special look at a part of the film, during select sailings in February and early March.

Character Meet with Ian and Barley

“On March 5, Ian and Barley will make their Disney Parks debut as part of the Disneyland After Dark: Pixar Nite special event, and beginning the next day – the same day “Onward” hits theaters – you’ll be able to meet them daily at Pixar Pier at Disney California Adventure park.

Soon, the elf brothers will also make their way to Hong Kong Disneyland, to meet guests and then join in the fun with the return of the Pixar Water Play Street Party!”

Disney parks around the world and shopDisney will also have merchandise from the film available to purchase! A variety of t-shirts, Magic Bands, plushes, and toys are currently available on shopDisney.com!

Are you looking forward to seeing “Onward?” Let us know on facebook!