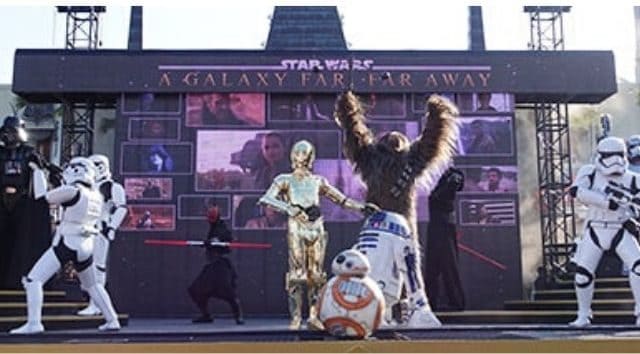 The bad news just keeps coming. The final performance of Disney’s Hollywood Studios “Star Wars: A Galaxy Far, Far Away” will happen earlier than expected. Read on for full details and the new date.

We recently learned that some entertainment cuts were happening at Disney’s Hollywood Studios in the coming weeks.

Star Wars: A Galaxy Far, Far away is a live-action show featuring Rey, Kylo Ren, Chewbacca, and Darth Vader. This show debuted in 2016, and it has been fun to catch some of our favorite and most feared characters in action!

The last performance was set on the schedule for March 14. However, the website has updated to reflect a new end date.

While Star Wars fans and Hollywood Studios guests are sad about the ending of this show, it makes sense for it stop because the opening of Mickey and Minnie’s Runaway Railway is set to open March 4, 2020.

In some more exciting news, Mickey and Minnie’s Runaway Railway is a FastPass+ option! It was unclear how the boarding process would operate for this attraction. Get all the details HERE.

We also mentioned that Bo Peep, Frozone, and Mike Wazowski would likely take a break from meeting guests. It is still undetermined when this will happen. It may happen with the end of “Star Wars: A Galaxy Far, Far Away” or at another time.

I am personally bummed about the end of a Bo Peep meet and greet. I know many thought she was a bit creepy, but my daughter wants to meet her. I don’t think that will happen for our next trip.

Will you be able to catch “Star Wars: A Galaxy Far, Far Away” one more time before it ends its run? Share your thoughts with us on facebook!