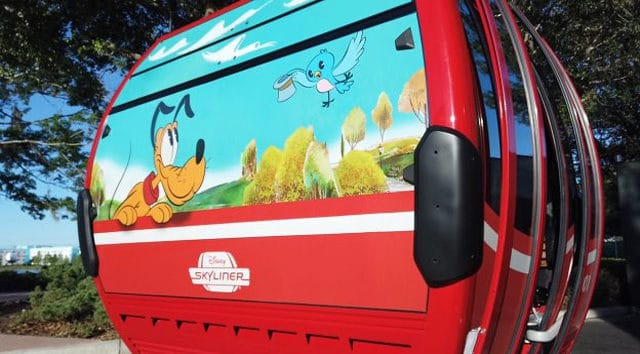 This morning, we reported to you that Disney had reduced bus service to once per hour from Pop Century Resort to EPCOT and Disney’s Hollywood Studios. By reducing bus service, guests are now being encouraged to use the Skyliner to get to those two theme parks instead.

It was speculated that this change might also occur for the other resorts on the Disney Skyliner route, including Disney’s Art of Animation Resort, Disney’s Riveria Resort, and Disney’s Caribbean Beach Resort.

Several sources have now reported that Disney has reduced bus service from the three remaining resorts on the Skyliner route. Bus departures from Disney’s Riveria Resort, Disney’s Caribbean Beach Resort, Disney’s Art of Animation Resort and Disney’s Pop Century Resorts to EPCOT and Disney’s Hollywood Studios have been reduced to once per hour, effective January 5.

Now that the Skyliner is the primary mode of transportation form the Skyliner Resorts to Hollywood Studios and EPCOT, the Skyliner will continue to operate on its current schedule.

Additional buses are expected to be running during times of Disney Skyliner downtime, such as the time outside of its normal operating hours or because of weather-related closures.

Bus service to Disney’s Magic Kingdom and Disney’s Animal Kingdom is unaffected by this change.

The Disney Skyliner opened in September 2019 and has been plagued with problems since opening. Just six days after opening, a Skyliner accident shut down the entire system.

Guests were stuck on the Skyliner for hours and ended up being evacuated by Reedy Creek Fire Department. Since that initial incident, the Skyliner has seen modified hours and occasional downtime (most recently last week).

What do you think of Disney’s decision to reduce bus service in favor of Disney Skyliner? Will you be riding the Skyliner on your next visit to Walt Disney World? Leave a comment below or on Kenny the Pirate’s Facebook page and let us know! You can also use the blue Facebook button below to share with your friends who may be visiting Disney soon.