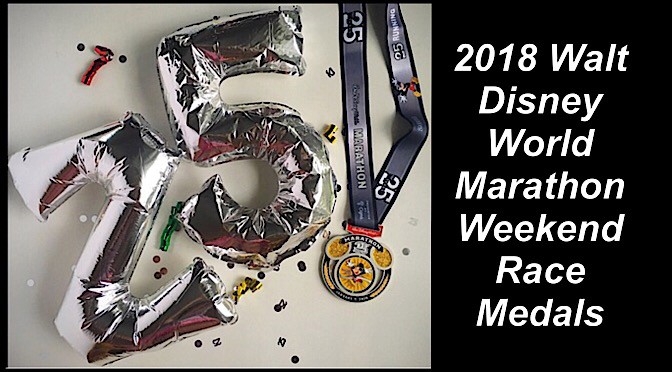 The Walt Disney World Marathon Weekend is compromised of four days, with four main races:  5K, 10K, Half-Marathon and Marathon.  For those feeling really Goofy or Dopey, they can push for one or two additional Challenges.  The Goofy Challenge requires running both the Half Marathon on Saturday and the Full Marathon on Sunday.  The Dopey Challenge  means running all four major races over the weekend.

While the overall goal for running the races in the Walt Disney World Marathon Weekend is guests’ health, many of the runDisney runners are greatly interested in the “bling” that comes at the end of the races.  Each race completion has its own unique medal.  For those serious runners, a full weekend running means a whole lot of heavy metal around their necks.  With so much importance surrounding the race medals, it is a big deal when the first images of the medals are released by Disney.

Let’s work our way through the Marathon Weekend.

The 5K race starts at 5:30 am at Epcot, with 3.1 miles going through Future World and the World Showcase.  It is the perfect race for beginners and experts alike to warm up with.  The 5K completion medal features Mickey and his pal, Pluto, going for an easy run.

Ready to stretch yourself a little?  Then let’s move on to the 10K, which adds a little more of the Epcot Resorts to a runner’s view.  10K runners will also travel 6.2 miles through Future World and the World Showcase of Epcot, but will continue out of the International Gateway to take in some of the Yacht and Beach Club Resort Hotels.    The 10K completion medal has a bold red background, which perfectly matches with both Mickey and Minnie Mouse on the medal.

The Half Marathon race is on Saturday morning of the race weekend.  It travels 13.1 miles through both the Magic Kingdom as well as Epcot.  Donald Duck joins Mickey on the Half Marathon medal.

The Marathon race is 26.2 miles that takes runners into all four Disney World Parks as well as the ESPN Sports Complex.  This year is the 25th running of the Marathon, and Disney has plenty of surprises up their sleeves for this race.  The completion medal for the Marathon calls out the 25th Anniversary, and has Mickey front and center on a spinner piece in the center of the medal.

Finish Another Challenge and Get More Medals

Finally, runners can register for the Castaway Cay Challenge.  After running in at least one of the major four races during the Marathon Weekend, runners will set sail on a Disney Cruise to the Bahamas the following Monday.  While at Disney’s private island, Castaway Cay, they will run another 5K in paradise and receive the final medal.

If you have not already signed up for one of these 2018 Marathon Weekend events, it is not too late!  Click HERE to visit the official runDisney page and sign up for any of the limited spots still open.

If you haven’t already seen the completion medals for the 2017 Wine and Dine races in November 2017, you can see them by clicking here.

Who is already signed up for running in one of the races in the 2018 Walt Disney World Marathon Weekend?  Are you happy with the medals for each of the races?  Let us know in the comments below.