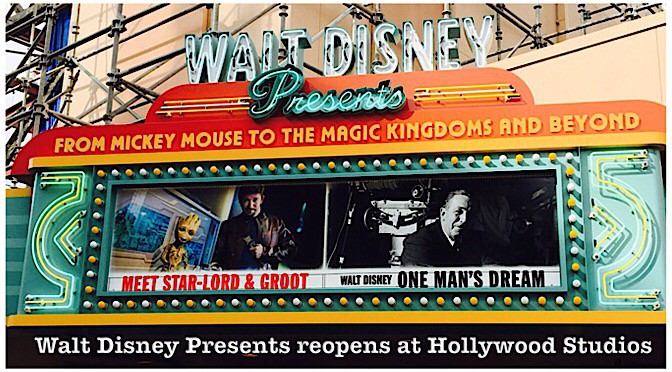 Disney made the announcement back in August that the One Man’s Dream attraction in Hollywood Studios would be revitalized and reopened with a new name, Walt Disney Presents.  Park guests can visit the attraction just outside of Pixar Place.  It is between Toy Story Mania and the The Voyage of the Little Mermaid.  Disney stated that the new exhibit would open on Friday, September 8th.

I wanted to see firsthand what the new space would contain.  So shortly after rope drop on September 8th, I made my way directly to the back of Hollywood Studios (at least it is the back until Toy Story Land opens).  The first thing I noticed after coming into the area was the new marquee for the attraction.

I like the new sign overall.  It still contains the phrase “From Mickey Mouse to the Magic Kingdoms”, but adds an additional “and Beyond”.  The “Beyond” calls attention to the most recent additions to the Disney Parks family (i.e. Shanghai Disney, Pandora, etc) and leaves room for future areas of Toy Story Land and Star Wars: Galaxy’s Edge.  Unlike the old sign, this marquee has lots of theater lights.  I can imagine that it looks just as inviting at night while lit if not more inviting.

Another noticeable detail of the new sign is the center that showcases what guests will see inside Walt Disney Presents.  On this first morning, the marquee has “Meet Star-Lord and Groot” as well as “One Man’s Dream”.   Unlike before, Park guests can quickly see what characters are in the Meet and Greet area.  Additionally, guests   also know what film will be playing in the theater at the end of the exhibit.  It is my assumption that as these may change over time with different characters meets and possible Disney movie previews, Disney will change the  marquee accordingly.

As before with One Man’s Dream, the exhibits shift halfway through to focus on Disneyland and the other Parks that followed.  This area of Walt Disney Presents starts with model replicas of Sleeping Beauty’s Castle as well as the Jungle Cruise. Guests can also see models of Cinderella’s Castle, the Hollywood Tower of Terror and Epcot’s Spaceship Earth in this section.

New parts of this section of Walt Disney Presents include wall photos arranged in organized clusters.  With each set of photos, Disney has installed plaques with descriptions that explain the photos.  Speaking with the Castmembers who are roaming around the hall to answer questions, the plaques had just been installed the night before.  The Castmember also pointed out that the photos of different attractions in the different Parks around the world were arranged so that each attraction was displayed next to the castle in its respective Park.

One week after its original release date, the new Toy Story Land model has officially been put on display.  Set to open in Summer 2018, the new area of Hollywood Studios will be a place where guests will shrink down to the size of a toy and play amongst the other toy.

The new Toy Story Land model contains images of the two new attractions for the area: the Slinky Dog Dash and the Alien Swirling Saucers.

The irony here for the Slinky Dog Dash Coaster attraction is that the model of the attraction is just now being seen by the public, whereas the actual track of the attraction is already complete in the area behind the Walt Disney Presents building.  (Click HERE for more on the track completion.)  In addition, Disney has already received the first ride vehicle for the Slinky Dog Dash.  Earlier this week, Disney Imagineers have placed the first car on the track for testing.  To see more video on that, click HERE.  There is still much to be done overall, and the ride will still not be open until Toy Story Land opens in Summer 2018.

Was the Toy Story Land Model in One Man’s Dream all this time?

The Castmembers told me that the Disney Imagineers had completed the Toy Story Land model already.  In fact, one Castmember shared a story with me that the Toy Story Land model had been close to guests all along.  Many months ago, the display for Walt’s desk had been closed in One Man’s Dream.  The glass had been covered from the inside, and no one on the outside could see in the display area.

According to this one Castmember, this hidden from view area was then used by Imagineers to start building this Toy Story Land model, and no one (not even the Castmembers working in One Man’s Dream) was aware that it was being constructed just on the other side of the glass as they walked through the exhibit.  Now, this has not been confirmed outside of this one conversation, but if true, is an awesome story indeed.

Disney added the Meet and Greet area to One Man’s Dream in November 2016.   It is still a part of Walt Disney Presents.  For the time being, guests can still dance with the famous Baby Groot and Star-Lord.  (They have nothing to provide as far as new information for the Guardians of the Galaxy Epcot attraction.)  So far, guests have only seen characters featured in major movie releases here.  Will that mean that Star-Lord and Groot will stick with us until the next film release?

Added to the exit of the character Meet and Greet is a small gift shop, if one can even call it that.  Disney has installed three retail shelves and a cash register right at the exit.  Any guests who are still filled with excitement about meeting Guardians of the Galaxy characters can immediately purchase GOTG merchandise.

The final portion of Walt Disney Presents remains the same.  The Walt Disney Theater is still playing the documentary film called One Man’s Dream.  This is a great film for guests to learn a little about Walt Disney.  I for one am glad that it will continue to play in the revised area.

Please note that this video was taken on the first day of Walt Disney Presents being open, before the two new models were yet on display.

Overall, the changes to the old One Man’s Dream exhibit are positive.  While it is yet to be fully experienced once the newest Land models are revealed, Disney fans that feared Disney would take away too much from this attraction can rest their fears.  Disney has done well with the new Walt Disney Presents.  The new exhibits still provide a good history of the man who started it all.  At the same time, Disney added new areas to give attention to both present and future Parks attractions.

After watching the video and seeing the images of Walt Disney Presents, how would you rate the new Walt Disney Presents?  Have you have made an effort to visit this attraction while at Hollywood Studios in the past?  Will the new area change your old feelings?