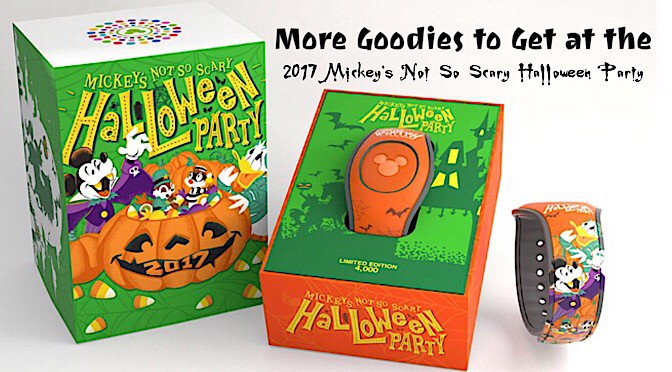 We brought you a first look at the 2017 Mickey’s Not So Scary Halloween Party trading pins at the first of the month, and now with less than two weeks until the first party of the year, Disney released more images of the special party purchases that will be available.  Like the pins, these selections will only be available during the Mickey’s Not So Scary Halloween Party for attendees.

They Will Put Their Spell On You

Disney has expanded the list of items that feature the Sanderson Sisters. In addition to shirts and a pin, it now includes both a light-up ornament, a limited release magic band, and a tote bag.

(UPDATE: At the first MNSSHP Party on 8/25, there was no Sanderson Sisters merchandise available.  There are rumors that these Disney may never release the items.   At a minimum, party guests will not find them at future parties until whatever issue exists has been resolved by Disney.)

Guests will want to check out the exclusive, glow-in-the-dark MagicBand that features Mickey and his friends dressed up in their holiday best. When guests smell the box, they can smell chocolate (similar to what their trick or treat bags will smell like after the party).  Disney is limiting the release of these MagicBands to only 4,000.

Not So Spooky Shirts and a Light-up Ornament

Party Guests can also find an assortment of party themed apparel for both kids and adults, a light-up pumpkin ornament, and a limited release logo pin.  For those guests who are also Annual Passholders, they will have the opportunity to purchase a t-shirt with the 2017 Mickey’s Not So Scary Halloween Party logo.

As we previously posted, Disney has created an exclusive pin set that takes its inspiration from the Hocus Locus Villains Spelltacular stage show.  Disney designed the pins to look like cauldrons unique to each villain with hinges that open to reveal the villain for each. Remember that you can purchase select pins as individual limited edition pins, each with an edition size of 5,400.  Instead, you may decide to purchase a boxed set with only 1,000 being available, or a framed set with only 300 being available.  Each of these will contain limited edition completer pins.  Annual Passholders can also purchase a  limited edition pin with Hades from Disney’s Hercules.

(Please note that the box set photo released by Disney today contains only five pins.  Previous photos show all six pins in the box set, but the recent photo shows the box set without the Chernabog completer pin.)

Disney is also releasing a limited release mystery pin set with the Disney characters you know and love dressed in their halloween costumes. This collection has 12 pins including four limited edition chaser pins.  The chaser pins have an edition size of 1,000. Each mystery pin box contains two randomly selected pins.

You can read more about the pins offered here.

If you wish to purchase any of this merchandise, you can find them in the Emporium on Main Street, USA and Big Top Souvenirs in the Storybook Circus area of New Fantasyland. If it is only the pins you wish to purchase, they will also be available at the Frontier Trading Post in Frontierland.

Who is ready to Trick or Treat at the 2017 Mickey’s Not So Scary Halloween Party, and get some of these in our bags?