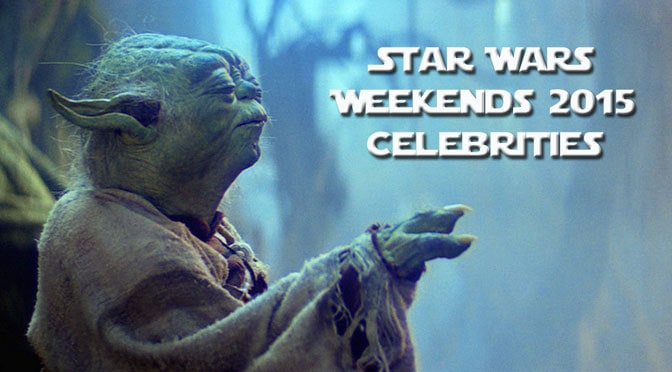 Ian McDiarmid is famous among Star Wars fans for his portrayal of Senator and Emperor Palpatine series.  Ian will appear Weekend One.  Frank Oz is the other big celebrity to appear for the 2015 Weekends.  He is the performer for none other than Yoda himself!  He is scheduled to appear Weekend 5.  Other popular returning celebrities include Peter Mayhew (Chewbacca), Warwick Davis (Wicket), Jeremy Bullock (Boba Fett) and fan favorite Ray Park (Darth Maul).

Here are the celebrities scheduled to appear for Star Wars Weekends 2015 (entertainment is subject to change):

The always upbeat and talented James Arnold Taylor will return at the official host each weekend and Ashley Eckstein will appear each day for the Padawan Mind Challenge – Family Edition.”

Details are still coming together for the event, but some of the highlights of what’s new for Star Wars Weekends 2015 include:

All this, plus dozens of Star Wars characters appearing throughout the park, yummy Star Wars-inspired treats and the spectacular fireworks finale, “Symphony in the Stars.” It just goes to show you that Star Wars Weekends is as close to the Force as you can get!

Additional Details on entertainment:  The major shows that take place during Star Wars Weekends will be hosted at the Theater of the Stars (Beauty and the Beast).  This will cause Beauty and the Beast to only be offered in the early morning and Star Wars shows in the afternoon.  The Fastpass+ option for shows should return.  The only downside for this venue is it is often closed during times of thunderstorms, so that could affect the entertainment during your date of visit.

Who are YOU excited to meet this year?