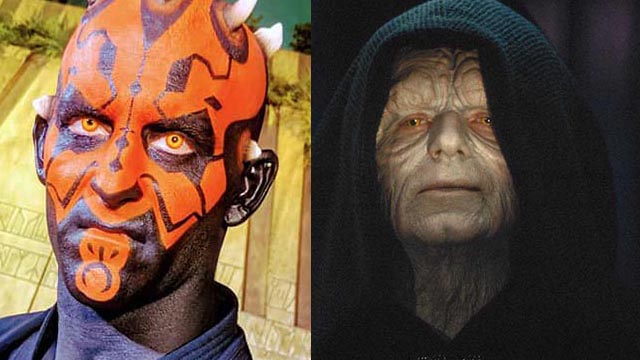 We continue with fifth day of the sweet sixteen. Now is the time to see who won yesterday, and vote for your favorite in today’s Disney Villain match-up. Read on to vote!

This is our fourth tournament. Previously, you have crowned your favorite Disney Attraction, Character, and Restaurant. Round two of March Badness continues with the fifth match-up.

The Evil Queen took the win yesterday and will advance to the quarter finals. Check out the results below!

I have included an updated bracket below? How is everyone’s bracket doing? Anyone have a perfect bracket still?

Today we are moving on to the Star Wars contestants that made it to the sweet sixteen. Today’s match-up is Darth Maul vs Emperor Palpatine.

Darth Maul is first introduced in Star Wars: Episode I – The Phantom Menace. He is ordered to capture Queen Padme Amidala and make her sign a treaty.

He is easily recognizable with his unique look and double-bladed light saber. Darth Maul killed Jedi Master Qui-Gon Jinn but then was defeated himself by Obi-Wan Kenobi.