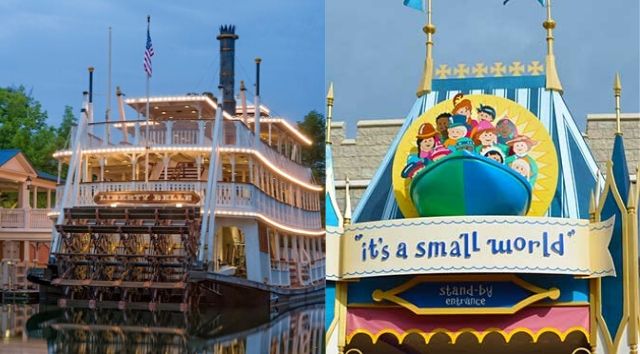 Yesterday’s challenge was probably the hardest one yet, with two beloved classics going head to head. I had an impossible time choosing myself. The winner of Game 4 was Peter Pan’s Flight!

its a small world is a classic ride, first designed for the World’s Fair. It is one of the day attractions that was available to Guests on Magic Kingdom’s opening day.

The attraction features the beloved anthem “its a small world,” and is a gentle, 10 minute boat ride around the world. Featuring singing animatronic dolls, “the happiest cruise that ever sailed” is beloved by children and adults alike.

Liberty Square Riverboat, located in Liberty Square, is an authentic steam-powered paddle wheel boat. It first opened to guests in October 1971, and is 17 minute nostalgic trip to the past.

Aboard this river cruise, you can listen to author Mark Twain share memories of his time on the Mississippi River.