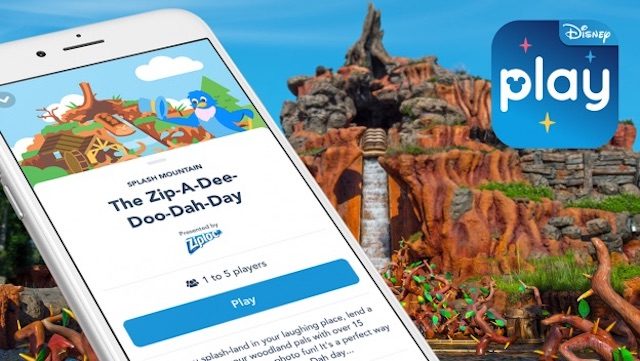 Disney fans all over are missing their “happy place” and are looking for fun ways to add the magic of Disney to their time at home. The Disney Parks Play App has some fun at-home features that will keep you entertained while you’re laying low, including a NEW trivia game!

Most fans know about using the Disney Parks Play App in the parks to help them pass the time while they wait in line for their favorite attractions, but did you know that there are features you can use while you aren’t at the parks as well?

Each of Walt Disney World’s theme parks has several trivia games that you can play from home! To access these games, look for the small question marks around the maps.

While in the main screen, if you select Magic Kingdom, you’re in for a trivia treat! Each of the separate “lands” or areas of Magic Kingdom have its own set of trivia games!

Click on the question mark in front of the Partners Statue, and you’ll be treated to Disney Parks Trivia at Magic Kingdom!

You can also find trivia for Dumbo, Fantasyland, Frontierland, Adventureland and Tomorrowland.

There is an Africa Trivia game over by Kilimanjaro Safaris. You can also travel through jungles, over mountains, and down rapids as you experience Asia Trivia!

Head over to Spaceship Earth, and you’ll find Disney Parks Trivia at Epcot. This trivia game will test you on the history of this beloved park!

In Future World West, you can test your knowledge of land, sea, sky, and more!

Future World East features trivia to help you explore the past, present and future

Of course, if you you want to take a trip around the world, you can play World Showcase Trivia!

Hollywood Studios has several fun trivia games to choose from. Try Disney Parks Trivia at Disney’s Hollywood Studios and put your trivia knowledge to the test about Star Wars, Pixar, and even Walt Disney himself!

Bring your Hollywood dreams to life with Hollywood Boulevard Trivia or travel back in time to Hollywood’s golden age and answer trivia about Sunset Boulevard.

Just before Mickey and Minnie’s Runaway Railway opened in Disney’s Hollywood Studios, we learned that the Disney Parks Play App would be releasing a new trivia game that we had access to at home!

Mickey & Minnie’s Trivia Time-Mouse Rules Apply will test your Mickey and friends knowledge. There are three trivia packs you can access from home containing hundreds of questions.

There are two additional trivia packs, but they will only be unlocked after you visit the parks and experienced “Vacation Fun” at Mickey Shorts Theater and Mickey and Minnie’s Runaway Railway. Those will have to wait, for now.

While you are playing any of the Trivia games, you can listen to your favorite parks music throughout the app. Throughout the map, you’ll see music note icons. Tap on those, and you’ll be given several music options to choose from that fit the theme of the park you are exploring.

Since I was last in “Hollywood Studios” to explore the trivia games in that park, my music is looping through several Star Wars songs.

If you have Apple Music or choose to download it, you’ll have full access to the songs. If you don’t, you can still listen to a sampling of music that fits with the park theme. This option is fun if you don’t mind the songs switching often and hearing a large variety of songs.

The trivia games are so much fun, and we here at Kenny the Pirate can’t get enough of them!

What do you think about these at home Trivia Games from the Disney Parks Play App? Let us know on Kenny the Pirate’s Facebook Page, or join our crew and continue the discussion.

Be sure to meet this Star Wars character appearing now