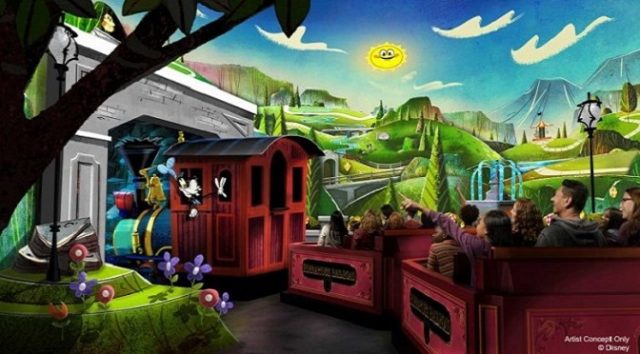 All aboard! Mickey and Minnie’s Runaway Railway is set to debut March 4, 2020 at Disney’s Hollywood Studios, and we can’t wait to experience this fun new adventure!

According to the Orange County Register, Walt Disney Imagineering had such a large story to tell, they decided to incorporate two storylines into the one attraction!

Mickey and Minnie’s Runaway Railway is the first theme park ride ever dedicated to Mickey Mouse. This dark, trackless ride will take you on an adventure through the world of Mickey Mouse.

Disney shares this description of this new and exciting attraction. “Once you step into the cartoon world of Mickey and Minnie, you’ll board a train with Goofy as the engineer. Then, one magical moment after the next leads you to a zany, out-of-control adventure filled with surprising twists and turns.”

Walt Disney Imagineering’s Kevin Rafferty spoke about the team’s decision to incorporate two storylines. “This attraction actually has a B story.  First one ever that has a B story in addition to the A story. It’s very clear and it’s very fun.”

Of the second storyline, Rafferty states “everybody will see it. It’s subtle, but you will see it.”

Rafferty further shared that the attraction itself is filled with subtle references and nods to Mickey Mouse’s 90-year-plus history. “As the show writer, I’m actually really proud to say that it has a beginning, middle, and end and a story sequence,” Rafferty stated.

“This is the kind of attraction that there’s so much going on,” Rafferty said. “Every scene is so jam-packed. It’s 10 pounds of potatoes in a five-pound bag.”

Rafferty is the executive creative director at Imagineering, and he currently oversees work on Mickey and Minnie’s Runaway Railway.

Besides his work on Runway Railway, Rafferty has helped design and oversee the creation of several beloved Disney attractions, such as Toy Story Midway Mania, Twilight Zone Tower of Terror, and Mickey’s Philharmagic.

“There’s so much to see,” Rafferty said. “So many nods to such great stuff that hearkens back to the Disney studio and little nods to different things, even Imagineering. It’s going to take you many, many rides through to actually see everything. And you probably won’t even then.”

Wow! This attraction is going to be amazing! This teaser has got me even more excited to experience it for myself!

This attraction is sure to be a popular one, so be sure to grab your Fastpasses ahead of time!

Are you looking forward to Mickey and Minnie’s Runaway Railway? Let us know on Kenny the Pirate’s Facebook page, or join our crew and continue the discussion!