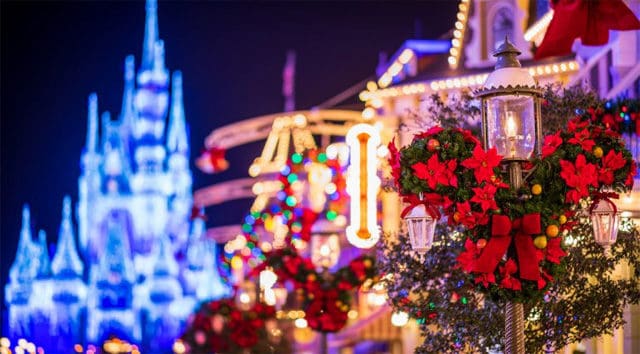 If you are traveling to Disney World soon after the holidays have come and gone, you may be asking yourself if you will still see some of the decorations around the parks and resorts.

It’s a nice perk of traveling so soon after the insane weeks of Christmas and New Year’s Day because the decor does not come down right after the holidays!

We know the process for getting them up varies based on several factors like when holiday entertainment begins and when the holiday taping for the Christmas parade takes place.

In 2019, the kick-off to the holiday season at Disney World began on November 8, 2019. It was when Jingle Bell, Jingle BAM!, the Christmas Tree Trail, the first MVMCP of the season, and the holiday version of Tree of Life Awakenings at Animal Kingdom all started.

The resorts were a little less predictable in their schedule. The Contemporary Resort had their gingerbread house up in late October, and the Grand Floridian’s display was up in mid-November.

You can check out our post for full details of decor going up around the parks and resorts HERE.

But when do the holiday decorations come down?

With the end of the holiday festivities on December 31 and January 1 (and even later at Hollywood Studios) but with Marathon Weekend taking place January 8-12, 2020, the bulk of the decorations stay up in the parks through Marathon Weekend but will likely come down before then at the resorts.

You may see a little come down at the parks before then, but the majority remains until after Marathon Weekend is over. If you are visiting after the week of January 13, you probably won’t see much of anything.

Epcot has to get ready for Festival of the Arts, which begins on January 17, so the holiday decor will definitely all be put away sooner rather than later. The icon tree was already taken down on December 30. The International Festival of the Holidays just ended December 29 so Epcot wasted no time.

Disney Resorts do not offer any real entertainment or holiday schedule so it is hard to predict when all the gingerbread displays, trees, and other decor come down.

In general, the Monday after New Year’s Day is when you can expect the decor to really start coming down at the resorts.

Have you ever wondered what becomes of all the gingerbread pieces that are part of the display?

Months of preparation takes place to bake and build the gingerbread displays. Pounds upon pounds of flour, sugar, and other ingredients are suddenly no longer needed after the holiday season is over.

Well, they do something special to make sure not everything goes to waste.

They remove the gingerbread pieces from the structure, with the sugar still on, and move them to the tree farm.

The sugar is power-washed off the gingerbread and left for bees to come to and feed off of in the winter!

It’s great that Disney does not let the gingerbread houses go to waste but continue the cycle of conservation and care. It’s a true partnership!

Here is a video Disney Parks put together showing the process:

So, if you are traveling to Disney before Marathon Weekend, you should still be able to see most of the holiday decorations in the parks. The decor at the resorts likely won’t be up that long, though.

Do you have plans to visit Disney World during the first half of January? What do you think of the process of taking down the gingerbread displays? Let us know in the comments or on Facebook – using the blue button below!