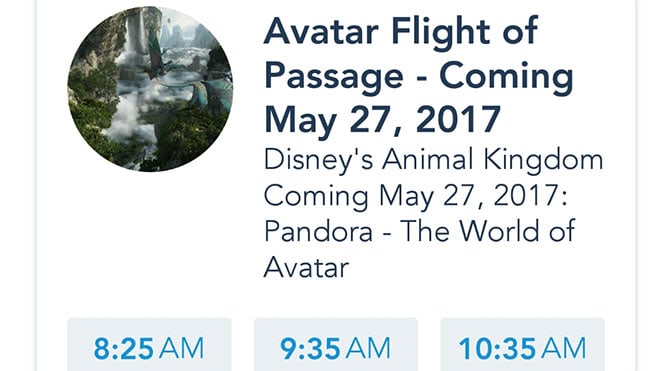 Those who logged into My Disney Experience at 6:50am were able to find that the Fastpass+ were already added to the system and found that Animal Kingdom park hours were extended.

You’ll notice that beginning May 27, 2017, Animal Kingdom will separate its attractions by Tiers.  Tier One will be Avatar Flight of Passage and Navi River Journey.  Tier Two are all remaining attractions.  You may only book 1 Tier One attraction PER DAY.

You then choose 2 Tier Two Fastpass+ per day.  (If you don’t want a Tier One Pandora attraction, you may choose 3 of the Tier Two attractions).  Once you’ve used all 3 Fastpass+, you can book ANY Fastpass+ that is available in the system.

I would book one Avatar Fastpass and then ride the other attraction at park opening or in the Late Extra Magic Hours.  The Avatar Flight of Passage attraction is like Soarin’ with a 44″ height requirement and it will have FOUR theaters.  Navi River Journey is a boat attraction like it’s a small world or Pirates of the Caribbean.

You’ll want to see Pandora after dark as well as everything will come to life in bright, vibrant light!

In addition to seeing the new Tier System, I noticed that the park hours were extended from May 27 through July 4, 2017.  Rivers of Light is also offering an extra show nightly.  You’ll find all the updates on my Crowd Calendars.  Disney HAS officially added the Nightly Late Extra Magic Hours that you’ll find on my Crowd Calendars, !