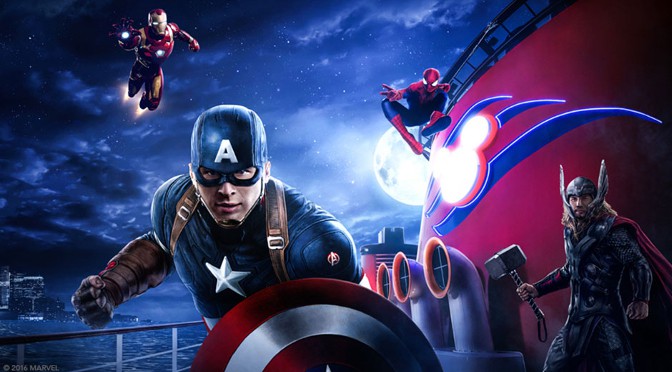 The Marvel Universe is in full force with exciting news from Disney Cruise Lines as they announce that they will be expanding Marvel Day at Sea to more dates, adding more characters and shows for a Marvel-ous day at sea! (image courtesy of Marvel.com and Disney)

Next year, 2018, you can experience Marvel Day at Sea on the Disney Magic during eight special voyages departing from Miami, January though April, following the premiere of the event from New York City in the fall of this year, 2017.  In addition to the characters already present for the event, Marvel Day at Sea is now adding exclusive character interactions with Iron Man, Black Panther and Loki, each of which are huge fan-favorites from the films and TV alike.

Doctor Strange will also be making a debut appearance for Marvel Day at Sea at the Walt Disney Theater by way of a “spell-binding new show” that will “keep families on the edge of their seats.” Disney Parks explains, “Doctor Strange will showcase his journey from doubter to practitioner as he demonstrates the power of the mystic arts.” To add to the excitement, the show is set to end with a final battle of epic proportions where guests will help Doctor Strange defend humanity against the Dark Dimension.

Disney Cruise guests will be able to enjoy a full action-packed day during the special Disney Magic sailings where they will be transported “to a new realm of possibilities” assembling the Marvel Universe on ship. Marvel Day at Sea will feature all-day entertainment including but not limited to interactions with Marvel Heroes and their foes, an exciting deck party, Marvel-themed events for youth, as well as special merchandise exclusive to the event.

The  newly announced sailings will departing from Miami will be on Jan. 7, 21; Feb. 4, 18; March 18; April 1, 15, and 29. Disney Parks states that “the five-night cruises will include a stop at Disney’s private island Castaway Cay and either Cozumel, Mexico, or Grand Cayman.” Marvel Day at Sea from New York, however, will be apart of seven- and eight-night Disney Magic Bahamian cruises departing on Oct. 6, 14, 28; Nov. 4, 11, and 18 in 2017 which will also include stops to Castaway Cay and Port Canaveral, FL as well as a day at the Walt Disney World Resort. Marvel Day at Sea will be apart of one seven-night Canadian Coast Cruise which departs from New York on Oct 21, 2017 stopping in Halifax, Charlottetown, and Sydney.

Are you excited for Marvel Day at Sea? Ready to take on Loki and save the universe? Let me know in the comments!