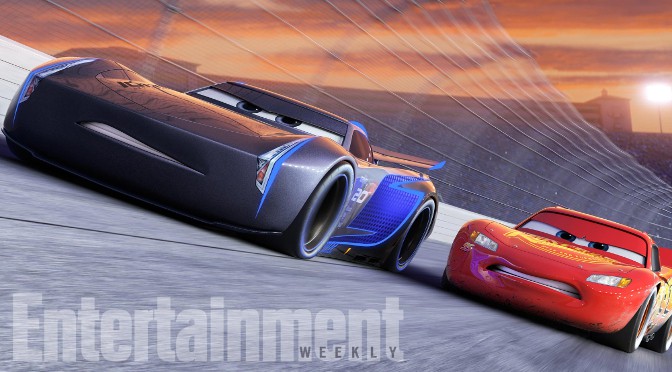 Following the release of the shocking teaser trailer that left many fans with more questions than answers, Pixar has released an extended trailer and, courtesy of EW.com, director of Cars 3, Brian Fee, and Pixar’s John Lasseter, we also have a more in-depth look at who and what Lightning McQueen will be up against in the third installment to the Cars franchise.

Meet Jackson Storm, McQueen’s new rival voiced by Armie Hammer. Jackson Storm is modeled after all the technological advances that have been introduced into racing since the first Cars movie was released in 2006. He is more advanced than Lightning in every single way and is a picture of how much the industry has changed over the last 10 years. Director Brian Fee explains, “Jackson was born with a silver spoon in his mouth. Everything comes easy to him, and everything about him says he’s faster, so much so that we’ve designed him so that even when he’s standing next to McQueen, McQueen looks old. He thinks the world is his. He’s taking over. He’s owed it.”

Lightning McQueen is not without hope. Cruz Ramirez (voiced  by Cristela Alonzo), lifelong Lightning McQueen fan, and now McQueen’s new coach. She may be on the age gap that Storm is to McQueen but she is on Lightning’s side of the conflict. She’s sunny, optimistic, fierce, and eager to come to his aid as she meets him at the Rust-Eze Racing Center. Director Brian Fee adds, “Whereas others like Jackson would look at McQueen and dump him, Cruz isn’t like that at all. She’s the most optimistic person in the world and wants to do anything to help,”

“McQueen is not the young hotshot anymore, the kid he was back then in Cars 1,” says Fee, a storyboard artist on the first two Cars films. “He’s in the middle of his life, and as an athlete, that’s getting up there. You have your whole life ahead of you, yet your career is starting to show its age. He’s looking in the mirror and realizing, ‘I’m 40 years old,’ and dealing with the fact that the thing that you love more than anything else, you might not be able to do forever.” John Lasseter describes Cars 3 as “very emotional”, and Brian Fee calls it “the most human” film of the franchise. It is currently unknown whether or not this will mark the finality of the franchise, Fee added, “Where the franchise goes from here, I have no idea what may be down the road, but I can tell you that for Lightning McQueen, as a character, I think by the end of the movie it’s safe to say that this is only the beginning for him.”

What do you hope to see in the film? What do you think will become of Lightning McQueen? Let me know in the comments!