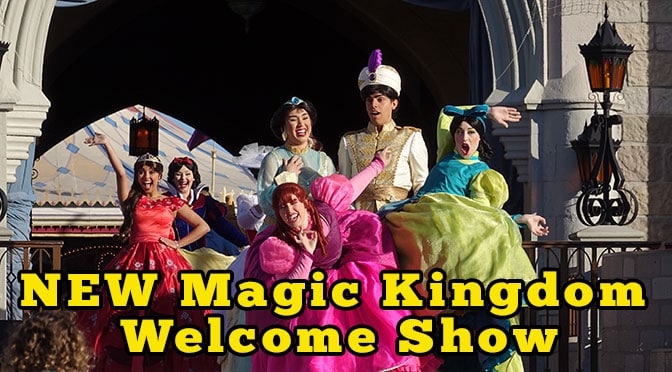 It’s no longer being offered at the train station.  Instead, you’ll be allowed to enter the park MUCH earlier and view the show from the Castle Stage.  It’s an all-new show experience.  Here’s the video as well as my thoughts on how it could affect touring the Magic Kingdom.

What is different about the way guests can enter the park now?

In past years, guests were held in the Mickey Floral area in front of the Main Street Train Station.  Some would gather near the ropes and some would gather in the center for the show which featured a Main Street Citizen, Mickey Mouse and a train full of characters.

Guests are now allowed to freely stroll all the way up Main Street into the Castle hub area, but are restricted from entering the various lands by ropes.

When are guests allowed to enter the park?

Guests are now allowed to enter the park at 8am for a regular 9am opening.   No word yet on days when the park opens earlier, but it’s expected to still open one hour earlier than REGULAR, non Extra Magic Hours scheduled opening.

What is open once I enter the park?

What about those special photos with the park totally empty?

Unless you are one of the first guests to enter the park for a Dining reservation at 7:45am, you’ll not see an empty park.  I did find it easy to take photos near the Castle between 9am and 10am with fewer guests around.  Otherwise, you may want to stay until the park is closed and it is empty of guests at night.

I have reservations for breakfast at Be Our Guest or Cinderella Castle, where do I go?

You’ll make your way all the up Main Street.  When you get to the hub area, turn left.  You’ll be allowed to enter the special area for reservations and tours which is located to the far left next to the popcorn cart.  You’ll then be allowed to walk up beside the Castle.  In the picture below, you’ll see that the Liberty Square bridge is in the background. I have Extra Magic Hours priviledge, where should I go?

Are characters still out during Extra Magic Hour?

Princess Fairytale Hall, meet Ariel and meet Alice are definitely open during EMH.  I need to confirm for Tinker Bell and Mickey Mouse.  All other characters who meet in Town Square and the hub are not out during Extra Magic Hours.

Can I still get onto 7 Dwarfs Mine Train a little early with breakfast reservations at Be Our Guest?

Yes, they still allow guests who had a breakfast reservation to board the ride about 8:45am each day, so you might get in one or two rides before the mass of humanity arrives at 9:02 am.

Are there other breakfast options available that don’t require reservations? When will the New Welcome Show begin each day?

What is the new Magic Kingdom Welcome Show, dubbed “Let the Magic Begin,” like?  What should I expect?

The new show takes on more of a royal welcome than the traditional Main Street approach that was offered at the Train Station.  Check out my video below.  It’s less than 4 minutes long.

The show begins with Sir Sterling, a member of the Royal Majesty Makers, welcoming the guests and realizing that it’s almost time to open the Magic Kingdom.  He then introduces Mickey Mouse who welcomes his many friends including Aladdin & Jasmine, Anastasia & Drizella, Princess Tiana, Belle, Merida, Elena of Avalor, Mary Poppins, Alice, Snow White, Rapunzel, Pluto, Chip n Dale and of course Minnie Mouse.  They all enter to the background music of Zip a dee doo dah.

Mickey then says it’s time to start the day and the Fairy Godmother appears to teach us all the magic word that will open up the park.

Where’s the best place to stand for the rides with the longest waits?

Before I break it down by the most popular attractions, I’ll state that 8:30am was the prime time to be at the various ropes and the rope that leads to Seven Dwarfs the fastest had a humongous line by 9am!  If you can get Seven Dwarf Mine Train Fastpass, do it!  If not, you’ll need to follow this plan or go right before park closing.  The line at park opening has always been bad, but this just made it worse.

I recommend standing just to the right of the Castle.  Stand at the rope that is heading up the pathway toward the Mad Tea Party.  You’ll follow this path, then curve left for the Seven Dwarfs Mine Train.  When I waited for the complete show, then put my camera away and casually walked to the Mine Train I found a line that extended all the way to Story Book Circus.  That’s easily a 90 minute wait, despite the fact that the posted wait was 30, then 45 minutes.  If you aren’t near the rope, you’ll wait a long time! You’ll want to stand at the rope that heads directly toward Tomorrowland and make your way directly toward the ride.  The wait wasn’t terrible on the first day.  It was more like 30 minutes shortly after opening, but still more than you’d like to wait, if you can avoid it.

You’ll want to stand to the LEFT or RIGHT of the Castle stage and follow the ramp up beside the stage.  When you reach the Prince Charming Carousel, turn left for Peter Pan’s Flight or right for the Princess Fairytale Hall.

Is this just a temporary show while the WDW Railroad is being refurbished?

From what I was told, this is the plan going forward.  Nothing in WDW is permanent, but this is what is going to be offered to guests for the park opening.  It seems, that unless there’s a lot of negative feedback, this is what guests will receive on a daily basis and the fun, dancing “Good Morning” show has now been retired and we move on to another era.  My friend said to appreciate that we have SOMETHING as parks like Disneyland and Disneyland Paris don’t have anything.

What happened to the “Family of the Day?”

It appears that one of the most coveted moments in Walt Disney World has been cut.  There was no special family on the stage with the characters.

Yes, I saw Chief Smokey driving Victoria Trumpetto around in the Fire Engine this morning and then watched the full Trolley Show along Main Street. If I didn’t cover a question that you may have, feel free to leave it in the comments below or on my Facebook page.  I may add your question to the post, if need be.