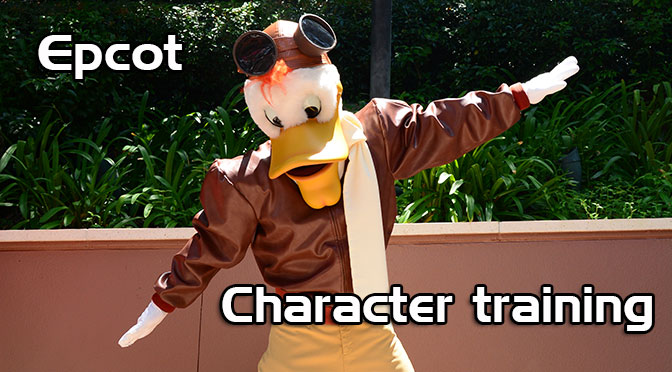 I’ve had a number of blog visitors ask about training spots in Epcot.  Epcot offers more training meets than the other parks by far.  There are a large variety of locations that I’ve personally witnessed character training including behind Innoventions near Journey in Imagination, the Fountain of Nations stage area and the International Gateway.  But the two most commonly used training areas are the World Showplace gates between Canada and the United Kingdom pavilions and the American Adventure gates to the immediate left of the attraction.  The best times to see rare characters are times near marathons, when the Disney College Program begins its new sessions,  and the week before Halloween and Christmas parties begin.

Some characters that we didn’t have a chance to meet in Epcot, but have appeared there for random or training include:  Captain Jack, Cruella, Dr. Facilier, Gaston, Jane, Mad Hatter, Max, Megara, Merida, Rapunzel and Flynn, Shang, Tarzan, Tremaine Family and Wendy.  I’m sure there are many more, but I can’t think of them all.

A Cast Member friend of mine thought it might be helpful if I shared which characters might appear at the World Showplace or American Adventure meets on a semi-regular basis.  While the list may not be exhaustive, it gives you an idea of where you might find the characters below and how often on a 1 to 5 scale you might see them.

Here’s some additions that another CM friend sent me.  The person said the ranking best applies to times when College Program cast are training.

Review: Disney’s most popular lounge is just steps from the Magic...