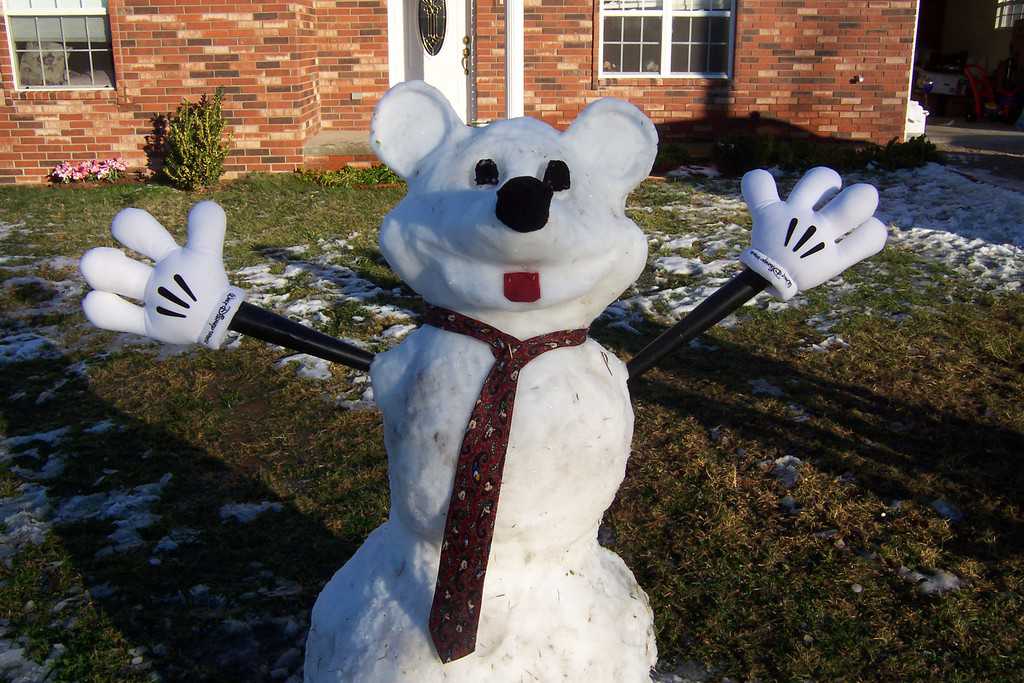 We’ve lived in the southern parts of the United States our entire lives.  I was born in Alabama and have lived in Georgia, Texas, Oklahoma and South Carolina.  So, for us, snow accumulations are a rare occurance.  In 2007, while living in Ardmore, OK, my kids and I decided to collect the snow in our yard and our neighbors yards in order to make a decent snowman.  We rolled the snow into very large balls and it basically stripped the yards of it’s 1 or 2 inches of wet snow.  After creating the traditional 3 ball design snow man, I thought it would look cool to add some Mickey ears, so I tossed on a couple more snow balls and we laughed.  I wondered how the snow man would look if I attempted to sculpt the ears to look more like Mickey’s ears.  All we had available were a few lawn tools and some paint scrapers.  The ears were looking really good, so I printed out a couple of pictures of Mickey from different angles and decided to see if I could actually create his entire face. After about an hour of sculpting, I had created my first every snow creation, but my kids thought he would look better with Mickey hands, which my son had from our most recent trip to Walt Disney World.  We tried to attach them with sticks, but it didn’t look very good.  My son came out with a couple of his plastic bats to use as arms.  We cut up a black sock to create the eyes and nose and a small piece of red fabric for the tongue.  I added on my very own Mickey tie and our first ever snow sculpture was created! A month or so later we had another, smaller snowfall and decided to create a version of Sleeping Beauty Castle.  We added all the parapets and small details that we could with the very limited amount of grassy snow. In 2008 we had another small snowfall and tried diligently to create a Donald Duck snowman before the snow melted, which was difficult because he was melting as we were building him.  After creating him, while the kids were at school the next morning, I decided to see what it would look like if I used water based paints that I thinned down to add color to the creation.  Well, it looked like I had created the world’s largest snow cone, but not as much Donald as I wanted. In February of 2010 we were living in Gun Barrel City, Texas which rarely has snow accumulations.  We awakened to find a nice 2 inch snowfall, but it was powdery snow, which doesn’t make good snowmen.  We had to wait a couple of hours for the snow to melt just slightly, thus created a wet snow.  We rolled all the snow from our yard and our neighbor allowed us to wheel barrow their snow too.  We lived on a hill, so pushing that snow up the driveway was difficult. My daughter and I chose to attempt our first ever head to snow creation using this wet-pack we had created.  My son has always been a huge Stitch fan, so we created Stitch for him.  To the top of his ears, Stitch measured over 5 feet tall.  We had a lei that we had gotten from a stay at the Polynesian, so that was a natural fit to add to Stitch. In late 2010 we had moved to our current residence in South Carolina.  The residents here teased us about our former character creations and told us we’d never see enough snow in Florence to make a decent snowman.  Well, we had TWO snowfalls that winter that allowed us to continue our creations with Phineas, Ferb & Agent P and later with Spongebob Squarepants. It’s fun to make the snow creations, but even more fun watching people stop to take photos.  Some of our snowmen have made it into the local papers and local news and Goofy actually won us a free steak dinner too!

So, if it snows this year in South Carolina, what would you like to see us create?