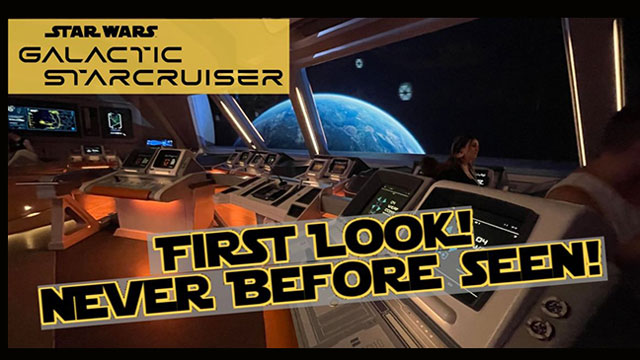 Are you curious what the Galactic StarCruiser in Walt Disney World actually looks like? What will the experiences onboard be like? Is this something that your family would like to experience? Take a look at these exclusive photos and video!

My friend Adam from our media partner Streaming the Magic had the opportunity to check out the Galactic StarCruiser during the media previews and he has provided some images and video for us along with some thoughts on his experience.

“We commanded the Bridge, Trained for a Light Saber Duel and Tasted all the delicious food offerings! We will go in-depth on this NEW immersive Star Wars experience from the Transport Pod to the Final Star Battle!”

Adam from Streaming the Magic

The Starcruiser uses a similar “elevator” technology to what is used at Space 220 restaurant in Epcot.

Adam observed a Stormtrooper attempting to take over the Starcruiser.

As they entered the main lobby’s grand atrium, they found a special droid roaming the room. The atrium is a two story lobby. Star Wars characters are available to meet and greet. The Captain was onboard to meets as well. They were served special green drinks, then the ship jumped to hyper space. Later they were led by Stormtroopers into the engineering room.

A First Order officer then interrogated them and they attempt to do some sort of “repairs” to the ship. The task in the engine was to help the First Order to sabotage the Halcyon. “I don’t know what that means, but we did it.”

From this point, they were led to do a tour of a stateroom. He was introduced C3-09 who is his logistics droid.

From the brief room tour, they were led to the bridge of the Halcyon to take part in some activities. Adam was assigned to be the “Red Rathtar.” They moved him about to various challenges. They could observe space battles occurring in the distance from the bridge.

The Captain of the Halcyon was then confronted by the First Order officer that the group met earlier in the engine room. The First Order then took control of the ship and the guests were sent back to the atrium and stormtroopers were positioned onboard. First order banners were added.

The group was then escorted to Light Saber training. Some were using Light Sabers and some were using some sort of shield. It began with a tracer beam, then they took away the beam. “It’s a lot harder than it looks guys.” They ran across Chewbacca shortly after completing the training.

They were then led to the “Climate Simulator” which allows them to get some sunlight. They were encouraged to stack stones and use the Force to move the stones.

From this point they were led to the gift shop, but weren’t allowed to actually shop. He wandered into the Sublight Lounge. He stated that it might seat 30 to 40 people. They were asked to return to the bridge. They took part in a game with Chewbacca and the Millenium Falcon to help blast away T.I.E. Fighters. “It’s like playing a giant video game together. It reminds me of an old school video game.”

Next he was offered an opportunity to taste some of the food and drink offerings. He displays some of the utensils and samples one of the drinks before being confronted by the First Order officer again. The onboard entertainer interacted with the officer, then sang a song for them. The entertainer turns the dining facility into a dance hall. They didn’t have the opportunity to finish his food and dessert before he was quickly escorted back to the atrium.

They were told they would be taken to their “Muster station.” Muster stations are typical onboard cruise ships. They allow the guests to know where to go in the event of an emergency. A couple of VIP Star Wars characters then appear and engage in battle. Check out the video below to find out who appears.

Check out the FULL video!

BREAKING: Changes to Modification Policies At This Magic Kingdom Resort

An Epcot Location Reopens after Refurbishment

When can guests enjoy new seating at Woody’s Lunchbox in Disney’s...