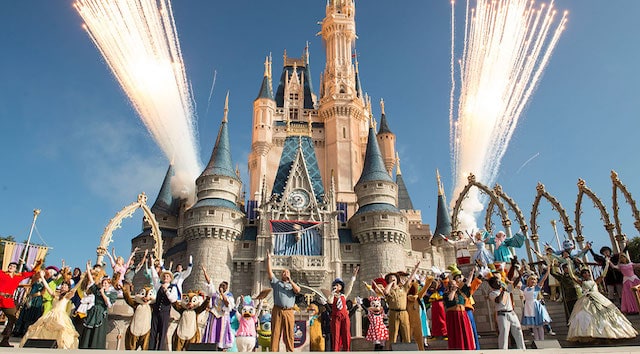 Disney World has found some creative ways to include characters in the visitor experience. Now an elusive character has been spotted hanging out in the Magic Kingdom!

The global pandemic has brought with it changes to the way the world runs. Disney World is no exception to the rule.

Among other precautions, Walt Disney World has had to eliminate character meet and greets where guests and characters can interact in close quarters. Practices such as hugging, autographing, and posing for photos with arms around one another are currently not allowed.

Even though Disney guests cannot enjoy traditional character meet and greets as they did in the past, the parks have re-imagined the roll of characters. A bevy of creative ideas have ensured that characters remain a part of the guest experience.

For example, instead of lengthy parades that draw large crowds, Disney has incorporated Character Cavalcades so that guests can see some of their favorites ride by at a safe distance. For a complete guide to these fun experiences, click here.

Characters are also popping up at key locations where they can remain socially distant while interacting with guests. For example, Storm Troopers have been spotted patrolling Disney Springs.

Some of the characters will still interact with guests from a far. They will even pose for socially distant selfies for those of you skilled in the art of selfie taking.

Who’s Popping Up in Magic Kingdom

A rare character has been spotted hanging around Fantasyland in the Magic Kingdom. Some guests were lucky enough to spot him today!

Guests have started spotting Pinocchio at Pinocchio’s Village Haus! I can’t think of a more fitting location for him than his very own restaurant.

Pinocchio is hanging out at pinocchio’s Village Haus

He’s got no Strings to hold him down. He waves and plays with guests from his perch on the balcony outside.

Now, when you visit the Villiage Haus, the boats passing by on Small World might not be the only thing you have to wave at. You can get in a quick visit with Pinocchio, too!

Typically a Pinocchio sighting is rare; he is very hard to find! He appeared in Fantasmic over at Hollywood Studios in the past, but otherwise his whereabouts was hard to pin down.

Before the Pandemic, guests could use Character Locator to help increase the odds of meeting him at Character Palooza. Palooza is currently unavaliable; however, Character Locator has all the most updated ways to spot your favorites.

If you find yourself in Magic Kingdom, and you want to see your favorite little woodenhead, scoot over to Fantasyland! You might just find on the Villiage Haus balcony.

Have you been lucky enough to spot Pinocchio or any other cool characters? Share your thoughts and photos with us on our Facebook Page.