I recently had the wonderful opportunity of attending the Wine and Dine Post Race Party at Epcot, and I have all the details on our experience!

It just so happened that the party landed right in the middle of our vacation this year and we jumped at the opportunity to attend. I have heard numerous times about the rare characters that come out during these events and was dying to check some off my bucket list.

I purchased our tickets directly on the RunDisney website. The cost was $85 per person and there was no children’s ticket pricing shown. If you ran the Half Marathon or the Two Course Challenge, admission to the event was automatically included with your package. You do not need to participant in the run to attend. There were plenty of family, friends, and spectators there who did not run the races at the event. As a comparison of past events, you can read Kenny’s review of the 2017 party HERE.

Our evening started around 8:00. Guests were allowed to enter the park on their party ticket starting at 5:00, but we had an early morning at Magic Kingdom and knew we needed to rest before the event. We entered through the main entrance and were guided off to the right side where the Leave a Legacy “tombstones” used to be. We were given wristbands similar to the Halloween and Christmas parties and were told to pick up a party guide map.

The map had a list of all the character meets and locations occurring for that night along with entertainment and food offerings that would be available during the party. As characters were our main focus, we made sure to study the list and prioritize our must-see characters. 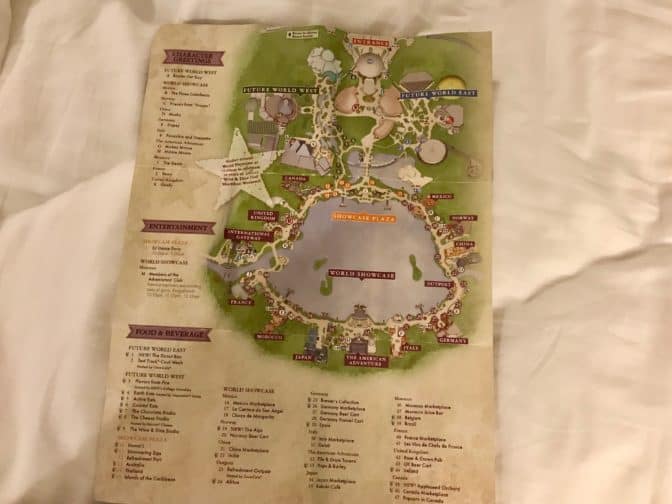 It seemed as if there were fewer meets this year than in years past; however, I was ecstatic to see that the Adventurer’s Club performers would once again be in Morocco. They were the other main reason we purchased tickets. You can see a full list of characters below:

Since the party didn’t officially kick off until 10:00, we figured we would watch the Epcot Forever Fireworks. This was the biggest mistake we made of the night, and you’ll see why… Our top priority was to see the Three Caballeros, who were meeting at the Mexico Pavilion. We found a spot for the fireworks between Mexico and Norway so that we would be close to our first meet. After the fireworks, we headed over to get in their line, but by that time it was already too late. The line had stretched all the way back to the Chozo de Margarita stand and was at least 2 hours long. 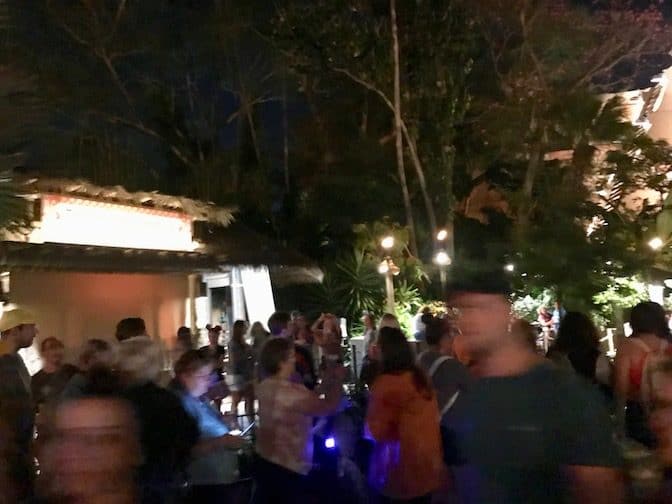 If we had skipped the fireworks we could have been closer to the front of the line.  I had heard reports that the line at one point stretched all the way down to the Odyssey building. We didn’t want to waste the entire night on one meet, so we abandoned ship and decided to try them at the end of the night. We moved onto our next character priority, which was Mushu. I had come so close to meeting him numerous times and just missed him each time. As we made our way to China, we passed by the line for the “Friends from Frozen” which was already extending down to the China Pavillion. 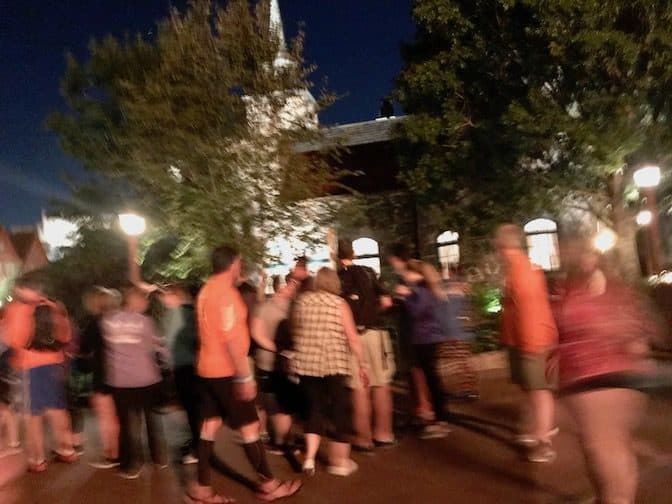 The map didn’t specify which characters from Frozen were at the meet on the map and after confirming with a Cast Member later that evening, I am glad we did not wait for them. It was just Anna by herself and then Elsa and Olaf together. Kristoff was not with them and you can meet the other three in the parks during normal hours. When we got to China, it was 9:30, and the line for Mushu had already started wrapping down the small pathway that Mulan meets on during the day. It wasn’t super long, so we decided to wait.

At about 9:40 the DJ for the party started playing dance music that was blast-your-booty-off loud. If you were standing side by side with someone you wouldn’t have been able to hear them. It only took about 10 minutes for someone to have him turn it down to a reasonable level, which made it much more tolerable. I felt the dance music was fun and kept the energy going all night, but some of the song selections were not the wisest for a family-friendly park such as “Baby Got Back.” Other songs like “Year 3000” and  “It’s Gonna Be Me” had people bopping and smiling away.

At 10:01 Mushu came out to begin his meet. The line moved very quickly with some small pauses for the Photopass photographer to get the lighting adjusted. Mushu kept the crowd entertained by dancing to N*SYNC’s “Bye Bye Bye” while they worked on the lighting. His personality was great and it was worth the wait to meet him. He signed our book and shirt and posed for some photos. When we exited the line it was 10:20 and the line behind me had grown to about 45-60 mins long. 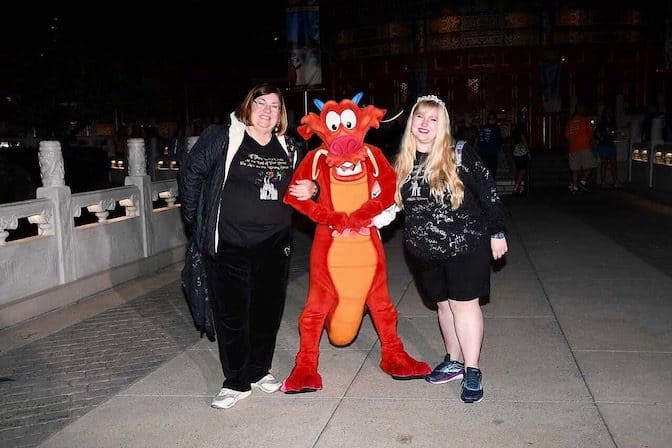 After Mushu, we decided to head towards Italy to catch Gepetto and Pinocchio. I have met them separately a few times, but never together. As we got there though, we noticed the line was pretty long and we didn’t want to miss the Adventurer’s Club show so we decided to try them on the way back. 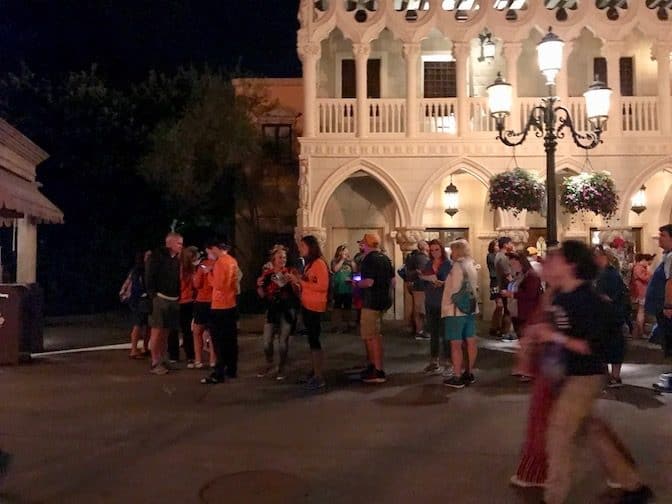 I grabbed a quick photo of the line for Mickey at the American Adventure Pavillion. His line did taper off later in the evening. Mickey and Minnie met separately. Mickey was dressed in his patriotic attire near the construction of the new Regal Eagle BBQ restaurant and Minnie met on the other side near the Santa and Mrs. Claus meet and greet area. She was dressed as a cowgirl and some people seemed disappointed that Minnie was not dressed in her Betsy Ross attire. 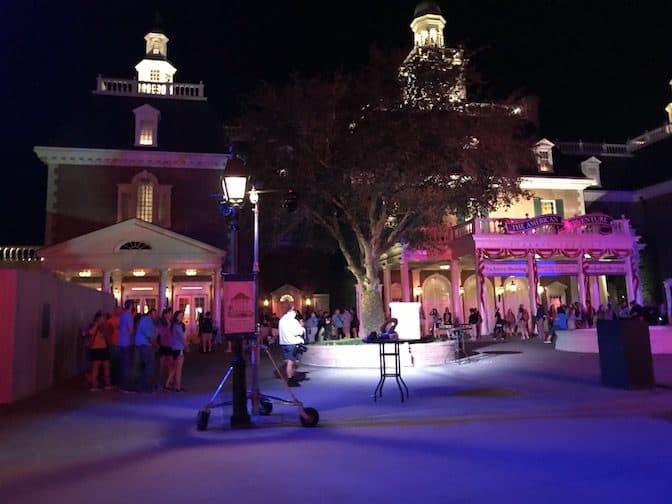 Meeting the classic characters in different outfits is not a personal draw for us, so we kept on walking. When we arrived at Morocco, the Adventurer’s performers were taking photos with guests after their first set. We just missed them, but knew we would get the photo after the second set. 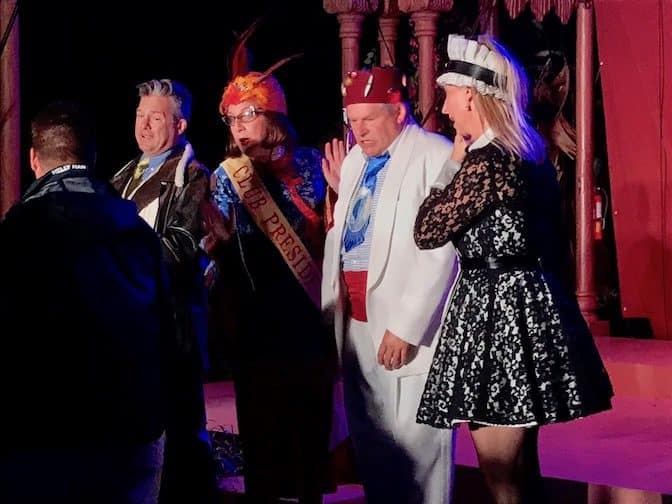 It was only 30 mins until the next show at 11:15, so we planted ourselves on a bench and waited. As a kid, I remember my parents taking me to the Adventurer’s Club in Pleasure Island and I have such fond memories of the place. I could have stayed there all night watching the different shows and wish Disney would bring it back… sigh…. By the time the performers were scheduled to come out, a pretty large crowd had formed. I was really glad we arrived early. The show was fantastic and the performers were some of the original ones I remember all those years ago. 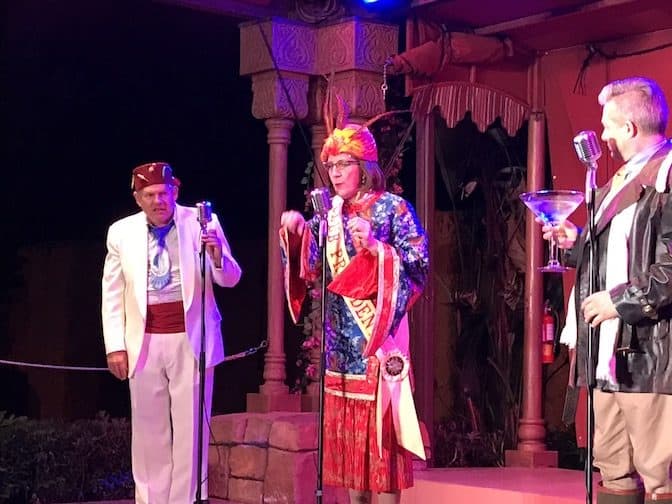 After the show, we decided to head back to Italy for another crack at Pinocchio and Gepetto. It was about 11:45 at this time and the line had definitely died down a bit so we decided to stay. As we were waiting in line, I felt a tap on my shoulder and turned around to see an old high school friend standing behind me. I knew she was at the party but didn’t know if we’d run into each other. We had a great time chatting and it passed the time waiting for the characters. When we left the line for Pinocchio and Gepetto, it was about 12:20. 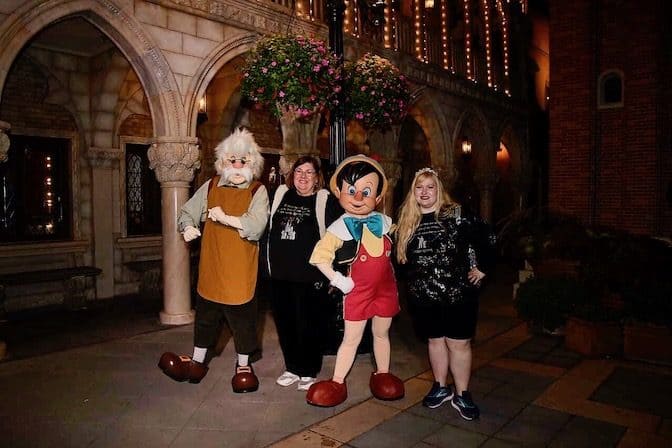 We decided to give the Three Caballeros one last try and made our way back to Mexico. Around 12:30 Dopey’s meet was down to just a handful of guests, but he has become less rare due to meeting at Artist Point nightly. 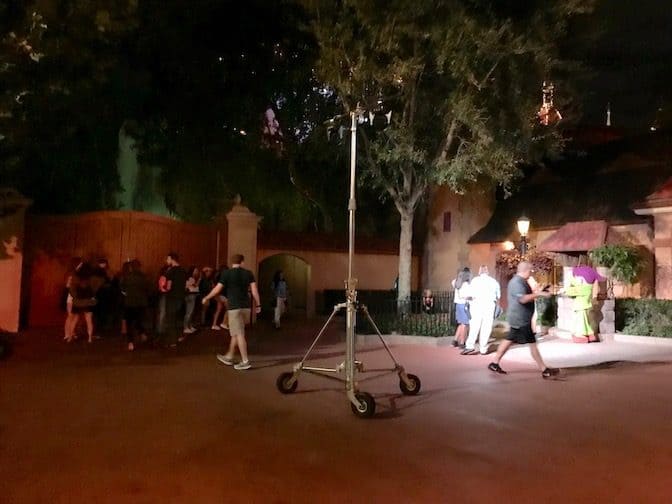 The Cast Members outside the Germany Food and Wine Kiosk were having a blast toward the end of the night and dancing away.

As we passed the Norway Pavillon, I noticed there was no line extending outside of the Royal Summerhaus for the Frozen characters. I did confirm at this time that Kristoff was not a part of the meet. 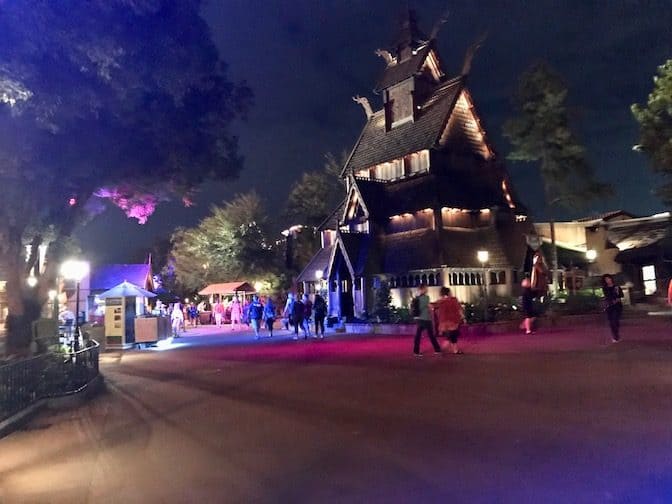 When we arrived back at the Mexico pavilion, the line had decreased significantly, but we were informed by a Cast Member that the line had been cut. We were told that we could wait in a standby line and see if they got to everyone in time, but it was unlikely as the regular line was still about 45 mins long and we only had about 30 mins left before the party ended. I knew that Bowler Hat Guy was listed on the map over at Innoventions West so we decided to see what his line looked on the way out. When we passed by the building, we saw no sign of Bowler Hat Guy or his line and just decided to keep on walking to the busses. I read reports on the Character Locator chat room that he was located closer to Imagination and that there was some misinformation provided by Cast Members in regard to his actual location at the beginning of the night that caused some confusion.

We made it back to our resort around 1:20 a.m. and got some much-needed sleep. Overall, I would stay this was a great event. I do feel that it was extremely crowded and the lines made the Halloween parties look good. There was definitely no way anyone could do all the character meets in the three hour period. Even though we only accomplished 2 character meets and the Adventurer’s Club show, I still would have paid the admission to see the Adventurer’s one more time. 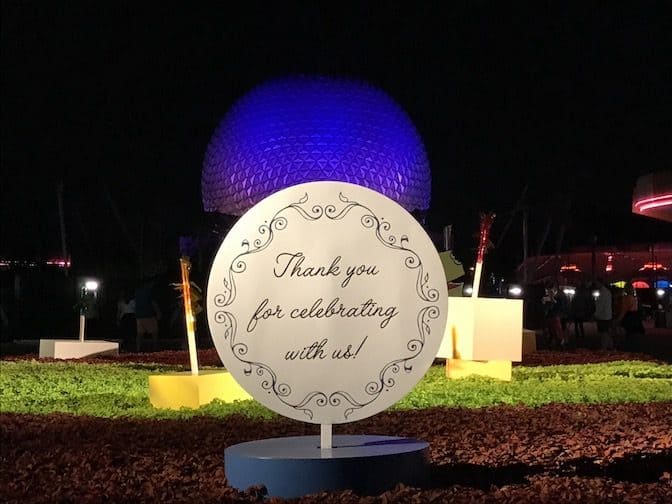 What do you think of the Wine & Dine Post Race Party? I would love to hear about your experiences!