In the Frozen sequel , the characters embark on a dangerous journey as they search for answers about Elsa’s powers.

Loosely based on Hans Christian Andersen’s fairy tale The Snow Queen, Disney’s Frozen was a runaway success and this year the characters from Disney’s Frozen are coming back.

Let go of whatever you’re doing, and check out the Frozen 2 trailer:

Let go of the past. Answer the call. The brand-new trailer for #Frozen2 is here. pic.twitter.com/BxDe4tPSmP

While the two sisters explore deep in the forest to seek the truth about the ancient mystery of their kingdom (Arendelle), Olaf and Kristoff also make an appearance.

Per Fandago: “[In Frozen, Elsa] had such a dramatic journey, and at the end she’s just starting to feel like she can open up and have some fun again.

In Walt Disney Animation Studios’ “Frozen 2, Elsa encounters a Nokk—a mythical water spirit that takes the form of a horse—who uses the power of the ocean to guard the secrets of the forest.

Josh Gad, who voices the lovable snowman, Olaf shared on an interview  that the songs in this upcoming film are “even catchier” than the songs in the original Frozen.

The sequel to the 2013 film Frozen features the returning voices of Idina Menzel, Kristen Bell, Jonathan Groff, Josh Gad, and Santino Fontana along with the new voices of Evan Rachel Wood and Sterling K. Brown.

What are your thought on the trailer and sequel ? 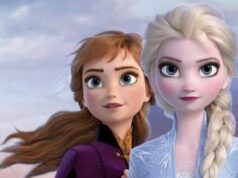 Disney Launches a New Celebration of Sisters and Siblings