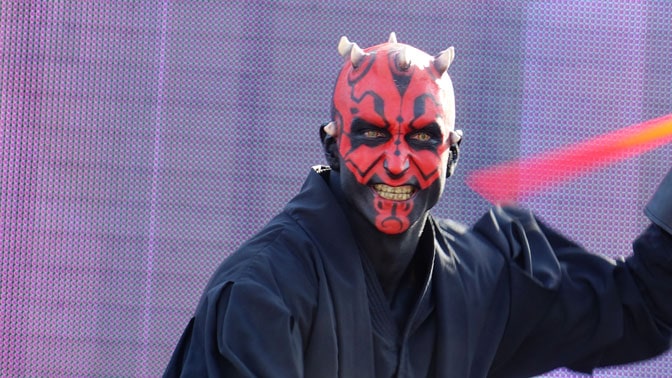 Star Wars – A Galaxy Far, Far Away is a 15 minute show that involves clips from the various Star Wars films and characters appear briefly onstage.  The show will take a brief hiatus beginning this week as some changes may be in the making.

The show features characters from the Star Wars universe that includes Kylo Ren, Chewbacca, C3P0, R2D2, Darth Vader and more.  Each appears briefly for a pose and brief presentation, then leaves.  Many call it the “Star Wars fashion show” because they parade out, snap a photo and leave.

It’s rumored that the leadership of Hollywood Studios doesn’t care much for the semi-permanent stage that takes up space in the fireworks viewing area and is basically a giant eye sore in front of the Chinese Theater.

Some Cast Members have told me that Hollywood Studios may remove this stage, then rig up some sort of portable set up for the show.  This, of course, reminds me of the old High School Musical mobile stage.  This is just rumoring until we see the changes.

In the meantime, Star Wars – A Galaxy Far, Far Away will be on hiatus from November 29 through December 7 with an expected return date of December 8.