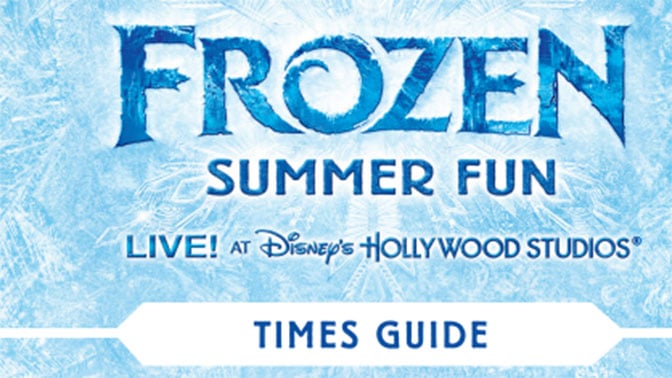 Hollywood Studios Frozen Summer Fun “Coolest Summer Ever” Times Guide is now available!  The Times Guide lists all the cool fun that will be offered in the park.

Food and Beverages will include a Let it Glow non-alcoholic drink and Summer Berry Margarita and Blue Dream alcoholic drinks as well as the return of the Olaf Carrot Cake cupcake. Special entertainment will include TWO daily showings of the popular Frozen Royal Welcome parade and stage show including Anna, Elsa, Olaf and Kristoff.  Elsa is said to be receiving a new parade float for this year.  I would line up 45 to 60 minutes early if you want to see the parade from Hollywood Boulevard and follow the parade to the stage.  If you wish to just see the parade past the stage 15 to 30 minutes should be sufficient.

Olaf’s Summer Cool Down will be a new show that is offered at the event stage several times daily.  The Frozen Sing-along should be moving to the renamed Hyperion Theater (former site of American Idol).  Hollywood Studios will offer the Coolest Summer Ever Dance Party.  Last year it offered an opportunity to dance with some of your favorite Disney characters in their beach gear.

The Frozen Fireworks Spectacular is something you should not miss and you should find an area sort of close to the event to the event stage 30 to 60 minutes in advance to see the show portions with the characters. If you wish to see Fantasmic along with the fun, you should watch the 2nd Fantasmic.

Frozen Fever will also be offered at the ABC Sound Studio.  This is a 10 minute short video that will be looped throughout the day. Review: Spice Road Table is one of EPCOT’s worst restaurants