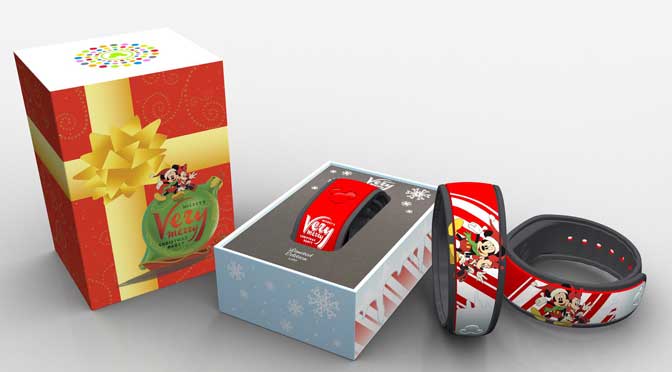 Walt Disney World is releasing four new MagicBands.  Some are Limited Edition and some are just special designs that have no limited number. A new Frozen limited edition MagicBand is going to be released at Hollywood Studios on November 3rd.

This new band will be a Limited Edition of 5000  which is the same print run as the Olaf “In Summer” band, and will come in a decorative box. It will make new lights and sounds at Fastpass+  touchpoints, but only in Hollywood Studios.  Price:  $29.95. Another limited edition MagicBand coming to Disney World will be the new Big Hero 6 MagicBand.  It features Baymax and Hiro in their hero costumes.  It is scheduled for an October 24th release.

It isn’t expected to offer special lights or sounds and will not be offered in a collectors box.  Price:  $24.95 A new Mickey’s Very Merry Christmas Party limited edition MagicBand will be released on November 7th, 2014 at the Magic Kingdom.

This MagicBand is Limited Edition 5000 and will come in a collector’s box. It will make new lights and sounds at FP+ touchpoints only in the Magic Kingdom. Price:  $29.95 A new regular edition Christmas MagicBand featuring Mickey and Minnie will be released at Walt Disney World on October 31st.

It will not feature special lights or sounds and should be priced at $24.95