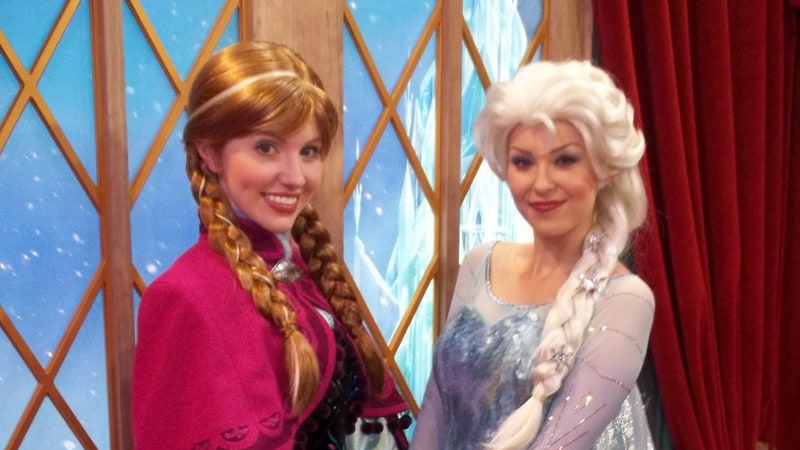 Anna and Elsa extend their hours of availability When Anna and Elsa moved to the Magic Kingdom and added Fastpass+ as an option, they were only promised to meet at Fairytale Hall from park opening until 5:00pm.  I immediately saw an issue with the abbreviated schedule and pointed out that it wouldn’t really change the length of the stand by line.  The stand by line has still been in the 3 to 5 hour range consistently for the Frozen sisters.  Disney has handled the FP+ aspect much better than I expected, but that caused the stand by people to stand around longer.

Well, effective June 1, Anna and Elsa are finally following the same schedule that Rapunzel and Cinderella will follow which is going to be park opening to 30 minutes before park closing.  This will extend the meet by 6.5 hours during the busy summer months, as well as offer additional FP+ for the meet.  Be sure to check your visit dates often to see if availability for FP+ is there.  I highly recommend using FP+ to meet them as the rope drop procedure at the Magic Kingdom is painfully slow and people jostle for positions a great deal.  No one should have to stand in that brutal line either.

Daisy and Donald separate after only 3 weeks In early May Donald and Daisy took over the Discovery Island Landing area that had previously served as a home to Tigger and Pooh.  Donald was wearing his blue sailor suit that many in which guests loved meeting him and Daisy was wearing her pink dress.

Well, it looks like all is not well in duckdom these days and Donald has moved back to his spot on the Cretaceous Trail near Goofy and Pluto.  Donald is wearing his Safari gear at this location and has left Daisy all by herself at the Discovery Island Landing.  I’ll stop by tomorrow to see if Daisy experiences a wardrobe change.

In related news, it’s really odd that Disney posted this and other meets at Fastpass+ exclusive, but as soon as they received a lot of negative feedback, they removed that from their app.  I was told they still have plans to create FP+ exclusive meets, but haven’t moved forward with that plan as of yet.

Snow White will no longer meet in Fairytale Hall

Snow White will get the boot from Fairytale Hall as a regular Princess in the evenings beginning June 1.  She may still make pop up surprise meets on either side, but will no longer be a guaranteed Princess.  She will continue to meet in Town Square until the early afternoon and she meets in Epcot as well as all the Princess meals.  Given the schedule, I’d recommend meeting her in Epcot so you won’t have to back-track to Town Square to hope to find her.

The Festival of the Lion King officially opens The first official date of operation for The Festival of the Lion King in its new theater in Harambe, Africa is Sunday, June 1.  The show will begin at 10:00am and offer shows on the hour.  The cutoff times will be based on park closing and will be offered in my www.characterlocator.com app.

The Festival of the Lion King will offer Fastpass+, but it may not be necessary to use it.  I’ll report back for you on that.   Upon checking at 8:43am on May 31, 2014 they only have FP+ loaded into the system until June 28, 2014.  I’m sure they will add more very soon.  I plan to attend the first show tomorrow morning and will be Tweeting and Facebooking away about the experience as well as filming the show for my Youtube channel.

Disney now prohibits Guests from doing this on Space Mountain

A New Bag to Celebrate 100 Years of Disney